Iran would win from US plan to partition Syria, by absorbing Kurdish region

It looks like the Pentagon geniuses who brought us the Iraq War are planning to partition Syria so that the northeastern region, where Kurds are a plurality, gets split off as a US client state in order to form a buffer between Iran and Israel. If the Pentagon cannot get regime change against a non-client state (Syria), they might as well try to check the spread of our regional enemy (Iran) toward our regional client (Israel). And they would get at least a pocket of the region under the US sphere of influence.

See this review of the plan, and below for a map of who controls which regions now. ISIS (gray) is confined to the desert in the southeast, the Kurdish militias (yellow) control the northeast, the Syrian government (red) now controls most of the heavily populated Levant, although with pockets of al-Qaeda forces (green) still in control of regions there as well. 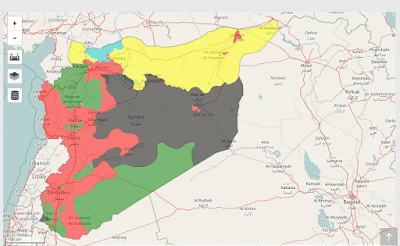 I'm not going to go over the details of what may happen when in the short term, between the various players. The longer-term goal of ours is to carve out a pocket in the northern Fertile Crescent that would be under our sphere of influence. Let's assess the viability of that goal itself, even assuming we could win our short-term battles.

In short, the only plausible outcome is Iran, our geopolitical rival, absorbing Kurdistan, whether as a client or through territorial union. A simple look over the history of empires in the Middle East, from the start to the present, shows that Iran would take the northern Fertile Crescent, not the US or any of its regional allies (Turkey, Saudi, Israel, etc.).

The Pentagon just got through trying to carve out a pocket of US influence in the Fertile Crescent -- Iraq -- and it has only ended up handing that country over to Iran's sphere of influence. Not to mention, no material spoils for us -- "blood for no oil," as Greg Cochran put it.

It's not so much that Iraq and Iran are both majority Shia rather than Sunni, although that certainly helps most Iraqis want to huddle under the Iranian aegis rather than some other group in the region, let alone the US that has been starving it and demolishing it back into the Stone Age for 25 years.

Rather, the reason is that the eastern Fertile Crescent has fallen under the Persian sphere of influence, off and on, since 500 BC (the Achaemenid Empire), and for hundreds of years at a stretch. It was most recently under control of the Ottoman Empire, based in the Anatolian peninsula, although that's the only empire indigenous to Anatolia that has ever ruled Iraq. And of course there was a one-off period where the nomadic desert Arabs fanned out and conquered the whole Middle East.

But as of around 500 BC, the eastern Fertile Crescent has been unable to originate its own empires (like the Akkadians), and has generally been absorbed by the Persian civilization that arose just to its east.

Before we began to bomb, starve, invade, and occupy Iraq, it was an independent nation that was somewhat aligned with the Soviets but not a mere client, it was at war with Iran, and was not under the sway of the Salafi state of Saudi Arabia (Saddam Hussein was a secular nationalist). Once we obliterated their society, it was too weak to remain independent -- and would therefore go to the strongest regional ally with whom they had the closest affinity, namely Iran.

It was clear we would not absorb it ourselves because that has never been the way we won over client states in the Middle East -- we didn't bomb Israel, Turkey, Egypt, Jordan, or Saudi Arabia into oblivion.

An identical outcome will result if we try the same old failed plan, this time in Syria. It's an independent secular nationalist country, aligned with Russia and Iran though not a mere client, and not under other regional control.

This time the plan would not be to bomb, invade, and occupy the whole country, topple the leader, etc., like we did in Iraq -- thank God that Russia has already beaten us to the punch, and we won't risk nuclear war over Syria. (Or so a sane military would conclude -- don't count on them as they flail for a victory somewhere, anywhere.) But it would replicate that strategy on a smaller scale, to carve out the northeastern region for a Kurdish client buffer state.

Now we ask the same question: would a client state that we imposed by force hold up? No: look at when we tried to impose the Shah on Iran -- that lasted all of 25 years, and triggered a violent revolution that made us their enemies for the indefinite future. When we tried to turn Saddam into our puppet, he rebelled and got too big for his britches, which the nomadic pastoralist Kurds would be certain to do before too long. Then we would invade, occupy, and destroy our Kurdish client state, hoping that someone more compliant would come along. In reality, a severely weakened client that we just obliterated would turn to someone else in the region.

So, which regional power would absorb this Kurdish state, given that we would not control it outright for more than a generation? Again we turn to the history of imperial spheres of influence in the Middle East.

Here's a map of where Kurdish people were concentrated in 1986, to give you an idea of the fullest extent of any potential Kurdish state that would be our client. It is roughly the northern Fertile Crescent: 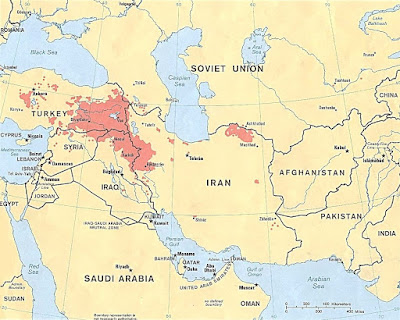 Indigenous empires used to form in this region, including the Indo-European Hittites and Mitanni during the 2nd millennium BC, and the Semitic (or Semiticized) Assyrians, whose last great empire died before 500 BC. So a Kurdish state would most definitely not grow into anything broader.

An empire headed in the Anatolian peninsula has done the trick twice -- the Byzantines and the Ottomans. But those were separated by 1000 years, and may have been bookends to a single period where Anatolia could conquer the Fertile Crescent. That rules out Turkey as the absorber of Kurdistan -- we see how much trouble they have even subduing those within their current borders.

The nomadic desert Arabs only had their one heyday with the spread of Islam throughout the Fertile Crescent, and are a clear non-factor today. They are decadent, fractured within their elite royal family, and have no encircling foreign empire to hold them together (like the Sassanian and then the Ottoman empires did to them).

Turkic or Mongol nomads are not about to sweep through from the East again, so they're out.

The Levant to the west has never spawned a regional empire, at least a land-based one (the Phoenicians were sea-based around the Mediterranean coastline). And being as riven by civil war as Syria already is, it is in no position to absorb Kurdistan.

Egyptian-based empires have never reached up into the northern and eastern parts of the Fertile Crescent, although they have occasionally conquered the Levant.

That leaves only the Persian sphere of influence. And sure enough, go through any map of a Persian-based empire from the Achaemenids circa 500 BC to the Safavids circa 1600 AD (including the Parthians and Sassanians in between), and it usually includes the eastern and northern Fertile Crescent. Here's the Safavid map showing not only Kurdistan but also Iraq under Persian control: 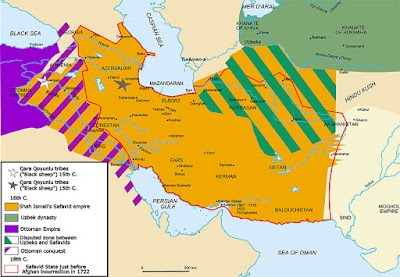 That shared political history is in addition to the greater ethnic similarity that the Kurds have with the Persians than they do with any other major ethnic group in the region. They're an Iranian people who speak an Iranian language, and who have a pre-Islamic Iranian substrate under their form of Islam. They already form 10% of the population of Iran, and have largely given up on ethnic separatism, unlike in Turkey.

The only plausible outcome of the US partition plan for Syria ends in the Kurdish region getting absorbed into Iran, whether as a client or through outright annexation / unification, and whether sooner or later. The clueless geniuses running the Pentagon have learned nothing from the Iraq War, and are hell-bent on handing over another part of the Middle East to our geopolitical rival of Iran, after impotently trying to impose its will on another unruly client state.

I don't buy the geopolitical BS about the US having to counter Iran's every move. Let them take over the northern and eastern Fertile Crescent -- it'll mean far fewer rampaging jihadists using the area as "the Harvard of terrorism" as Trump described post-Saddam Iraq. Our only goal should be countering radical Islam, and although Iran is a theocracy, it does not spread its religion violently or instigate religious war elsewhere. No more September 11ths (that was the Saudis, not the Persians).

I look at the geopolitical angle only to show that, even by their own standards, our military brass has absolutely no clue what the hell they're doing, what long-term historical forces there are in the region, and which of those forces is most likely to pull Kurdistan into its orbit. They're simply tunnel-visioned into punishing the Middle Eastern nations that resisted our sphere of influence from the Cold War era. If we don't get the hell out of there, that will be our own figurative Afghanistan (on top of our literal Afghanistan).