Over the decades, Israel has gradually joined the Sunni nations of the Middle East based on their common rival of Iran, which is neither Jewish nor Sunni, but Persian and Shia. That is despite the initial tension between the Jewish state and the Arab Muslim states in the region, who were often at war over Israel's very presence. But anti-Iranian politics makes strange bedfellows.

Iran will always serve as a force that other nearby nations will think about balancing against, because it has tended to absorb others within its sphere of influence rather than the other way around, since around 500 BC (Achaemenid Empire). The last time it was under foreign control for any length of time was in the 1400s under the Mongolian / Turkic rule of the Timurid Empire. Unlike the rest of the Middle East and North Africa, it fought off Ottoman imperialism (the Persians -- very tough negotiators, folks).

But now it seems that the Sunni players in the anti-Iran coalition may feel strong enough to start getting rid of Israel, who never really fit into their club of Arab Muslims. At least, if the Sunni extremist nations led by Saudi Arabia can get a quantum leap in their military power from Uncle Sam, who is also going to try to help put together a NATO-like alliance for the Sunni Arab nations.

When President Trump arrives in Riyadh this week, he will lay out his vision for a new regional security architecture White House officials call an “Arab NATO,” to guide the fight against terrorism and push back against Iran. As a cornerstone of the plan, Trump will also announce one of the largest arms-sales deals in history. ...

One main objective is to put forth a framework and basic principles for a unified Sunni coalition of countries, which would set the stage for a more formal NATO-like organizational structure down the line. [source]


So far, the potential members of Arab NATO are Saudi Arabia, UAE, Jordan, and Egypt. If the purpose were simply anti-Iran, they could have made a "non-Persian NATO" that included Israel. Whether or not they eventually let in Israel, they certainly seem uneasy or unwilling to do so at the start.

The largest arms deal perhaps in history is also going to make Israel nervous because they might lose their edge in the region:

Finally — and this is the most speculative of everything I've mentioned — it's possible you'll see an announcement of the U.S. and Saudis working together on identifying Saudi defense needs over a 10-year period and talking about what the U.S. is prepared to sell the Saudis over that period. This part will be complicated because the U.S. must coordinate with the Israelis to maintain their "Qualitative Military Edge," the formal name for the U.S. policy of ensuring that Israel maintains military superiority over its neighbors. [source]

On the one hand are the evangelical Judaizers who never quote the New Testament and worship Israel as their homeland. This is a grassroots phenomenon, which percolates up to the Congressional level, where conservative Republicans have to pledge to defend Israel in order to get elected. Democrats must do so as well because Jews are one of the key ethnic groups in their coalition based on minority identity politics. The media relies on a grassroots audience, so it too portrays Iran negatively vis-a-vis Israel, which the news consumers culturally identify more with than Saudi Arabia.

So, the Cultural Left and Cultural Right in Congress, along with the media, have a mostly Zionist angle on hating Iran.

On the other hand are the military brass who style themselves as the administrators of a global empire including the Middle East, where the primary commodity is oil (this attracts the energy industry alongside the Pentagon). Saudi Arabia has the #1 oil reserves, but it was also not under control of a European imperial rival of the US that could have blocked the Americans from taking it on as a client. (After WWI, Britain and France inherited the remnants of the dead Ottoman Empire outside of Turkey, and the Ottomans never got the Arabian Desert where the Saudi clan hailed from.)

This has caused the US military to become deeply committed to the main source of jihadism in the M-E and around the world, and that's why you rarely hear the brass use terms like jihad, Islamic terrorism, etc. That would implicate their ally Saudi Arabia, so they go with the vague "terrorism" phrase, which you can accuse any nation of supporting, and obscures the Islamic connection.

So, the Pentagon and the energy industry have a mostly Saudi angle on hating Iran.

Here, for example, is some world-class kvetching from a Jew complaining about the Secretary of Defense saying that Israel's capital is not Jerusalem, that the Israeli settlements on Palestinian land are a sticking point in the M-E peace process, and that if that continues Israel will become an apartheid state:

Mattis’s ignorance is understandable because he hails from the US Military’s Central Command. The Pentagon’s area command responsible for the Middle East has one debilitating problem. It is a problem that guarantees that Centcom officers will fail to understand the Middle East and fail to win America’s wars in the region.

Centcom’s problem is that it deliberately does not include Israel.

As far as Centcom is concerned, Israel is not part of the Middle East. Israel is in Europe.

Centcom officers speak only to Arabs. And their Arab counterparts insist that Israel is the problem.

Rather than critically analyze this claim, Centcom officers internalize it. [source]


And bringing it back to the Arab NATO trip, here are some complaints that a Christian conservative Ted Cruz supporter has about the Pentagon's more Arab-friendly stance toward Israel: 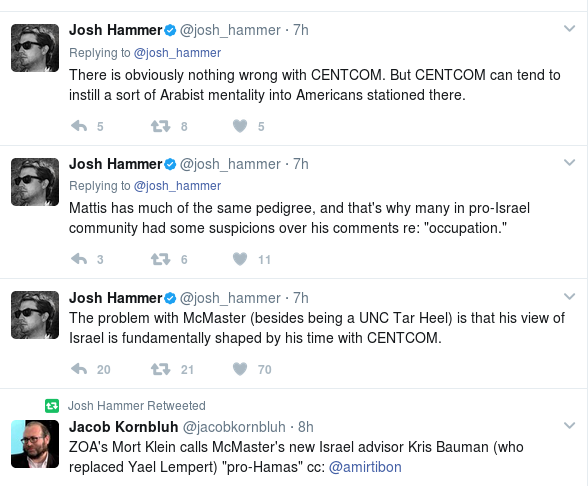 NSC Advisor McMaster at a press briefing declined to say that Jerusalem belonged to Israel, and has been undermining the US relationship with Israel ahead of the Arab NATO trip, according to reporting by Mike Cernovich (whose sources have proven correct at least back to the tip-off about the airstrike on Syria, not to mention the scoop he had on Susan Rice being the unmasker of Trump officials' names in surveillance).

In fact (listen to Cernovich's report here), the alleged leak of classified information during Trump's recent meeting with the Russian Foreign Minister did not take place, since Trump just brought up a topic that had been in public media reports for months -- that ISIS was trying to find ways to get a bomb on a plane inside of a laptop battery. Instead, the real leak of classified info was to the Washington Post, from their source, who knew far more granular detail than the President (who does not get every little detail of every little report, unless it's "need to know").

That info could compromise an Israeli spy who is embedded with ISIS, who first found out about the laptop battery bomb plot. So the leak of all the specific details to WaPo from a White House source with extensive knowledge, is being treated as a major national security breach, that could also severely damage our relationship with Israel, who must now be wondering if the US can be trusted to keep a basic secret provided to them by Israeli intelligence agencies.

According to Cernovich's sources, McMaster is the only one who knew all of the pieces presented to WaPo, although his deputy Dina Powell could have known also, but they are really just two members from the same Pentagon / Deep State team.


Scoop - "McMaster is the only person who had all of the pieces. He is the person being looked at most closely as source of leak."
— Mike Cernovich (@Cernovich) May 17, 2017

McMaster and Powell picked a fight with the Israelis by leaking information to WaPo that Trump never had. Bigly mistake, you might say.
— Mike Cernovich (@Cernovich) May 18, 2017


The Pentagon faction of the anti-Iran coalition in America has made a decisive pre-emptive strike against their supposed anti-Iran partners from the cultural politics faction. The armed forces and oil industries will prevail over the cultural domains of the media, organized Jewry, and evangelical Christianity because US governmental support for nations in the Middle East is based on geopolitics and economics, not cultural affiliation.

Many on the Left and the Right portray Israel as having special powers over US policy, but we're already seeing how it's the jihadist nations that truly drive our policy. Israel used to be allied with them for a little while, so you could have said either one was the driver. But now it's clear.

Actually, it was clear before then -- we sided with Egypt over Israel in the Suez Crisis in 1956, and only brought on Israel as a source of local muscle when we saw them whip everyone's ass in the 1970s. And yet, the Arabians still have all that oil, and a much longer history of being our ally -- and when was the last time Israel whipped everyone's ass anyway? Ten years ago, they got driven out of Lebanon by a ragtag local militia (Hezbollah).

After its explosive birth, Israel looked to be a latter-day David slaying Goliath, perhaps bound to expand throughout the region after they took the Sinai peninsula, southern Lebanon, and the Golan Heights of Syria. But now they're turning out to be just another statelet in the Levant, a place that has never spawned a (land-based) empire that included key other places around the region. As demographic trends make a small minority out of the Ashkenazi Jews who are not parasitic Haredim, the brief South African style attempt at European colonialism will become a Middle Eastern country again (Palestinians and Mizrahi / Sephardi Jews).

If history is any guide, they will ultimately fall under the sphere of influence of long-term regional powers Egypt or Turkey. If Iran continues its influence in Syria, that would presumably block Turkey from becoming Israel's patron state to the north, and it would turn south toward Egypt for partnership. Egypt is also less prone to Islamic extremism than Turkey, especially now with Erdogan leading Turkey and el-Sisi leading Egypt. And Egypt would be the member of Arab NATO most likely to split off as a strong power of its own, not wanting to be made an equal to Saudi Arabia.

If the Zionists want to return to their ancient roots, what better way than by seeking refuge under Egypt's wings?

But we should not be so excited to become less burdened by Israel if it means we intensify our alliance with the jihadists in Saudi Arabia. We've already had one September 11th too many to trust those backstabbing Bedouin, and now their radical mosques are infecting Muslims right here in America who commit jihadist violence without even having to get through our borders.

Unfortunately, it will probably take some catastrophe to convince our military brass to finally GTFO of the Middle Eastern black hole. Russia and Iran vs. America and Saudi Arabia -- we've had so much success there, why not up the ante to include a nuclear rival?

The Pentagon has been going on one great long psychotic fugue for the better part of 30 years in the Middle East, and if it means allying with Israel and the pro-Israeli culture warriors in America in the short term, it would be worth it to out-maneuver the Pentagon from marching us into nuclear Armageddon.