Now that Trump is skipping the Fox News debate for an event of his own to raise funds for the veterans, we won't have to sit through another two-hour event moderated by Megyn "Penis Envy" Kelly.

Because her livelihood relies so much on crafting and promoting a persona, she can never act like a normal person or a professional in a setting where the focus is on someone else. With a professional interviewer, the focus is on getting answers from the interviewee -- remaining in the background, presenting an unassuming facade, gaining the subject's trust, and coaxing out responses when they're reluctant.

With a persona striver, the professionalism becomes inverted -- her groupies are tuning in to watch "Megyn Kelly doing an interview," regardless of who happens to be responding this time around. It's a performance of a character, rather than doing a job. Now the focus is on the interviewer, the emotional satisfaction comes from hearing not the responses but the questions (zingers, gotchas, effusive praise, etc.), acting like a hammed-up caricature, keeping the subject at arm's length and not caring if they trust you, and being bullheaded and failing to get a good answer when the subject is reluctant.

Moderating a debate is like juggling several interviews at the same time, so naturally a persona striver will pollute a debate even more than a one-on-one interview. We saw that big-time during the very first GOP debate, where Kelly led off by attacking Trump's character in a statement, rather than asking a good-faith question about some substantive issue.

Some of the other female moderators did a basically professional job -- Dana Bash, Becky Quick. But so far the best has been Maria Bartiromo during the Fox Business debates. Working for a business network, her focus is on the career world, not the lifestyle and persona contests that are more popular with those who are not / cannot rise to the top of their career path. She's just trying to get the answers that will resolve the uncertainty her viewers have over where some candidate stands on this or that topic.

She also behaves respectfully and charitably, and just a bit playfully, when other matter-of-fact interviewers come off as almost distant and therefore not trying to gain the trust of the subject.

We see how fine a balance it can be to behave "just a bit" playfully by comparing her to Erin Burnett on CNN. Like most Celtic people, Erin is a born instigator, but she lets it go too far most of the time, and savvy interviewees will sense that she's trying too hard to get them to reveal a secret. She always has this raised-eyebrow expression like she's playing flirtypants with the men or begging the women to dish on whatever juicy gossip they have. It's almost child-like in its not-so-subtle eagerness, and while that does lend a cuteness to her that is lacking among most TV news personalities, it keeps her from getting the most out of her subjects. More like, she's good at stirring up a food fight at the cafeteria table of her discussion panel.

Maria's more charming-and-disarming approach lets her get more from her interviews, and keeps her personality in the background where it belongs. We know she can be cute, too, but we don't need for it to become a performance. Only on occasion, when it will feel less artificial anyhow. 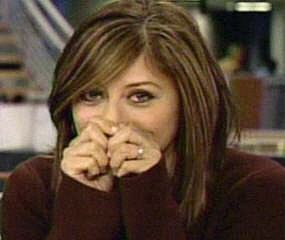