It's striking how many Facebook posts and pictures I've seen, for years now, about 20-somethings having Thanksgiving dinner by themselves / with their partner / with their friends.

I searched Google Images for recent Thanksgiving pictures, and even when you do see a family, it's usually of a single nuclear family, not an extended family. And even the handful of extended family pictures tend not to include both a vertical and horizontal dimension -- including as many generations as possible, and as many siblings and cousins within a generation. Maybe there's a grandparent, one of their children, and their grandchildren through them -- but not all their children and all grandchildren. Or maybe there's a large group of middle-aged siblings and their children, but no grandparents.

I attribute this to the transplant phenomenon, which has grown during the status-striving climate of the past 30-40 years. It's not related to the cocooning trend, since Midcentury pictures of Thanksgiving all show extended families, vertically and horizontally around the family tree.

The Greatest Generation didn't move far away from their hometown, while the Me Generation (Silents and Boomers) left for greener pastures in the career world. Gen X-ers and Millennials are leaving for a different reason -- greener pastures for lifestyle striving (Portland, Brooklyn) -- but still to pursue individual status at the expense of duties to one's community (there's only one -- the one where you were raised).

This not only separates generations but also family members within the same generation -- one careerist sibling may head north, another south, another east, and another west. One lifestyle or persona striver from Iowa may head off to Portland, and another to Brooklyn.

And it's not always easy to simply re-trace the transplant paths. If the Greatest Gen member lives in a small town or rural area, which was way more common in the pre-striver era, it will be hard for the urban and suburban Boomer children to all make it back, let alone the grandchildren who are even more urban-dwelling. The nearest airport may be awhile away. That puts the onus on the Greatest Gen member to head for the suburbs of their Me Gen children, which in their old age they may figure isn't worth it (although mine did, up through their 60s).

When there was only one generation of transplants, it wasn't so difficult to get everybody together. But now that the second generation, too, are transplanting, there's another degree of scattering. My hunch also says that the careerist transplants didn't move as far away from their hometowns as the lifestyle strivers do. Both of these mean that the problem has accelerated over time, and has probably only become noticeable during the past 10-20 years, as the Gen X-ers and later the Millennials began to transplant away from their transplant parents.

My memories of Thanksgiving in the '80s still included most of the extended family, aside from an uncle and his wife who moved Out West awhile ago (my cousins through them were absent, too). For those of my mother's siblings who stayed in the general region, it was common to see all the aunts and uncles, as well as the cousins, and of course the grandparents on that side. But those get-togethers involved one-way travel times of at most three hours by car for all involved, and usually under two hours. You could travel there and back in the same day, so nobody needed to put you up.

Contrast with today, where transplants spend seven or eight hours door-to-door, one-way, and will have to be put up for one or more nights.

There's another way in which the lifestyle strivers seem to be making things worse. Since they're foodies, meals are a fashion contest, and fashion corrodes tradition. So why would a foodie want to trek all the way back to family, just to have the same old things for Thanksgiving? They would rather spend Thanksgiving alone and pick up a pre-made dinner from Whole Foods, as long as they put sriracha in the stuffing. That's something you could post to Facebook for status points -- not whatever your non-foodie parents would have prepared.

And of course lifestyle strivers would want to show off whatever trendy plates, glasses, and silverware they've bought in the past month. You can't do that if you're eating at a family member's house, where you can't bring your own trendoid items and would have to post Facebook pictures that showed your host's IKEA place settings from the '90s.

I'll be thankful for being able to share Thanksgiving with four generations for the first time in a long while, and for having had this kind of Thanksgiving during my formative years. Here are some reminders of how extensive the family relations were not so long ago, one from real life and another from Hannah and Her Sisters. 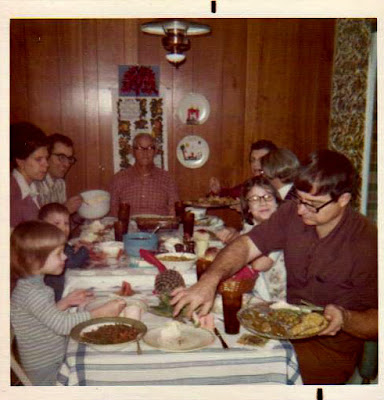 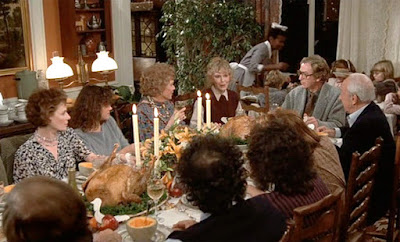