An earlier post looked at the history of income tax rates, which rose only after the country became more ethnically homogeneous. The foreign-born part of the population began to steadily decline after a peak around 1910, whereas income tax rates didn't start climbing until ten years later during the '20s, when immigration was closed down. Only with an increasingly similar population would voters support taking on higher income taxes -- they wouldn't be going to some faction or another of a fragmented society.

Something similar happened with the minimum wage, another hot topic nowadays with rising income inequality. Only here the delay was even longer: despite some regional attempts in New England in the 1910s, it wasn't until the early '30s that a national policy was enacted, and even then it was declared unconstitutional a few years later by the Supreme Court. Not until around 1940 did a minimum wage law survive at the national level.

It's also worth noting that just because there's been a minimum wage law since the New Deal era, doesn't mean its value has stayed the same over time. In fact, its value rose during the Great Compression -- ending around 1980 -- and has fallen during the current era of hyper-competitiveness and status-striving. The graph below shows the inflation-adjusted value in the light shade: 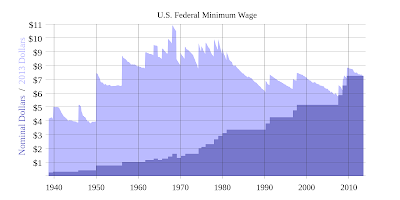 Thus, pushing for a higher minimum wage in today's climate of soaring immigration and competitiveness would be putting the cart before the horse. The lesson from history is that we first need to kick out the foreigners who don't belong here, close down immigration, and allow the population to grow more homogeneous, trusting, and civically engaged (see the Robert Putnam study on diversity corroding trust). Only once Americans have reversed the "Bowling Alone" mindset and lifestyle will they be more willing to raise the minimum wage.

By the way, this should temper the enthusiasm that some populists on the Trump train have for Ted Cruz being appointed to the Supreme Court under a Trump presidency. He would almost certainly rule like the Lochner Era Justices (roughly 1900-1940), who shot down the first national minimum wage law. Restoring populism is going to require a hell of a lot of support among the Supreme Court, just like it did the last time around, and Cruz is not the man for that job.