Whites who are not transplants: Their prevalence across regions

To help us understand where different parts of the country are demographically, as well as where they're going in the future, we need a better picture than simply race.

Not that race doesn't tell us a lot -- we know the heavily white regions won't be plagued by as much violent and property crime as the heavily black and Hispanic regions.

But for a true sense of communal stability, the white people can't have all just shown up yesterday, from all over the country. Boomtowns that act as transplant magnets have shallow roots in the present, and may never develop roots into the future. Only if everyone there today stays put, and not too many newcomers flood in.

If the boomtown keeps drawing in wave after wave of latter-day gold-miners, it hits a great big reset button and never allows existing roots to grow. And if the boom goes bust, the place turns into a ghost town. Either way, merely waiting a long time is not good enough for roots to be put down.

I've combined these two factors into a single measure: of the region's population, what percent of them are non-Hispanic whites who are native to their region?

The data come from the General Social Survey, which asks where you were living at age 16. The question about Hispanic background was only asked starting in 2000, so the picture here is valid for the 21st century. I restricted the population to those aged 25 and above, since transplants tend to take awhile to finally move out to wherever they're staking a claim.

"Transplant" here means someone who's living in an entirely different region than where they grew up, not simply moving from L.A. to San Diego, or from New Jersey to New York. Small-scale migration won't be that destabilizing, but having a large share of your population coming from a different region does not bode well for local stability.

This chart ranks the Census regions by their share of non-Hispanic, white, regional natives:

Here is a map of which states are included in which region: 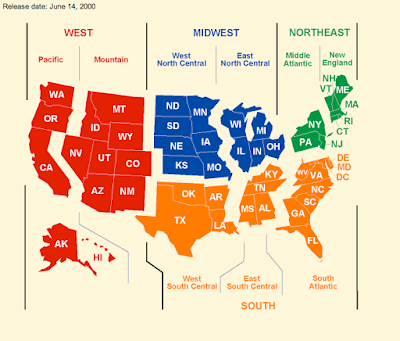 Far and away, the eastern part of the Midwest has the highest concentration of rooted whites. Quite simply, a large share of the population is white, and whites are most likely to be natives in this region. Plenty of folks may move out of Michigan, but nobody moves into Michigan.

New England and the western part of the Midwest also have highly white populations -- in fact, slightly more white than E.N. Central -- but they are twice as likely to be transplants (24% vs. 12%).

The Mid-Atlantic suffers from only 70% being white, although they make up for that somewhat by having the second-highest rate of staying put.

Southern Appalachia (E.S. Central) has a decent-sized white population at 80%, but over one-quarter of them are transplants.

The other Southern and Western states are all about tied for last place, for varying reasons.

The Mountain states suffer from the highest rate of transplant-ism among whites (barely 50% of whom are native to the region), although non-Hispanic whites do form three-fourths of the population. And of course the West Coast is bound to be dead last: just under 60% are non-Hispanic whites, and of these, only 67% are regional natives.

For now, I'm not going to use this geographic pattern to explain other patterns, or try to account for the present one. Before doing that, it's worth wrapping your mind around a simple description of which parts of the country have higher and lower concentrations of rooted white people.