Here is an article on labor force participation rates among young people, using data from the Bureau of Labor Statistics.

We all know that young people these days aren't as eager to work as they used to be, but how far back does that go? And is their non-participation due to economic factors such as rising inequality and related trends, or to social factors like cocooning?

The data for 20-24 year-olds goes back to 1948, and up through 2013. The cycles for inequality and status-striving, as studied most in-depth by Peter Turchin, are independent of the cycles for cocooning and crime. This is great because with a long-enough period of data, we can test and see which of the two cycles a certain phenomenon maps onto. Here is the graph from the article; click to enlarge. 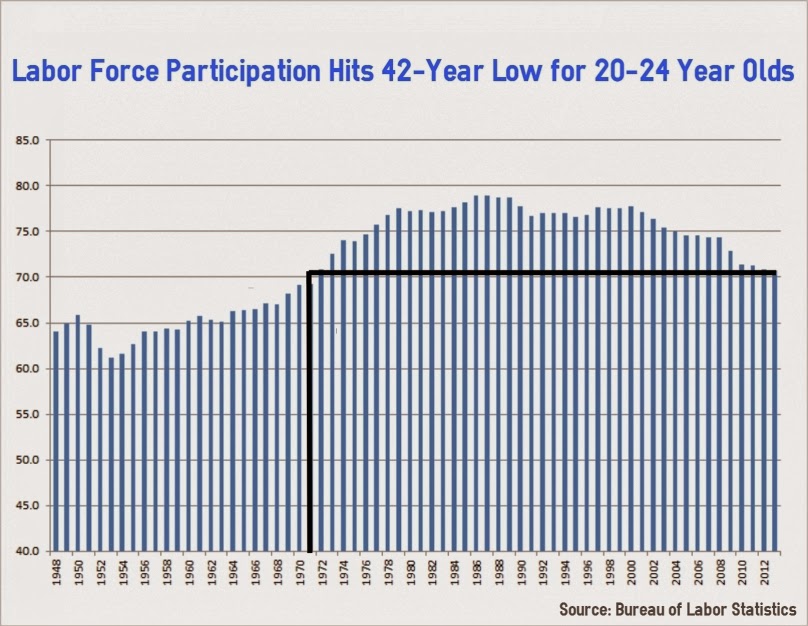 The Great Compression, from the 1920s through some time in the 1970s, saw the top falling and the bottom rising within the economic pyramid. It was easier to get jobs (aside from the Great Depression), they paid better at the bottom and median, and young people were not status-strivers who planned to go through a lengthy credentialing process before getting their first job.

And yet that does not show up in the picture above, which is only for young people. The late '40s and most of the '50s show falling or stagnant levels of labor force participation. It's not until the later '50s that things start to steadily increase, and they continue up up up through a peak in the late '80s. Since the early '90s, it's been almost all downhill, notwithstanding a hiccup in the late '90s.

Those movements map more closely onto the cocooning vs. outgoing social mood. Getting your first job as a young adult is one of those things that isn't too hard to set up, provided you don't mind leaving the security of home life.

Shoot, in outgoing periods, youngsters not only do not mind, they are damn eager to head off on the path toward independence from parental discipline. Plus you get to meet new people on the job, at least your co-workers and perhaps customers as well if you're in that line of work. Sure, you'll meet some retards and assholes, but you've got to take the good with the bad, right? You'll add new acquaintances, romantic partners, confidants, and activity buddies.

And -- somebody you can blow off steam to. I think a large part of the anxiety that grips a cocooning society is not having anyone you can vent to throughout the day. A little vent here and a little vent there, keeps the pressure from building up too much. Especially when the listener has gone through the same frustration. It lets you know you're not the only one in a bind, and you get to laugh it off. "Another old lady holding up the line to write out a check..." "Lady bosses, eh?" "Paper jam again? Sometimes I think we're all part of some sick psychology experiment..."

However, all of those benefits of working -- aside from the material ones -- require you to be open to interacting with other people. For folks in a cocooning society, that starts to feel like too heavy of a price to pay. "Ugh -- other people." For older adults, they're just going to have to suck it up, which is why the economic inequality cycle shows a rosy picture for workers overall during the Great Compression, despite a good chunk of it taking place during the cocooning Mid-century.

But the Silent Gen youngsters didn't have to sink or swim like the Greatest Gen adults did during the Mid-century. They could indulge their preference for social isolation for a little while longer before taking the plunge into the work force.

This is one of the hardest things to keep straight when looking at history -- that even though there is a prevailing zeitgeist, it influences and is influenced by different generations in different ways. Baby Boomers and Gen X did not have the same experiences in the '80s, even controlling for their age difference. During a cocooning period, a generation whose upbringing was fairly social will weather the storm better than a generation that is a product of cocooning and over-parenting.

Finally, I realize that more 20-24 year-olds are in higher ed today than during the good old days, but that doesn't explain what's going on either. The higher ed bubble began circa 1980, so if studying rather than working is the cause, the graph should show a dip during the '80s, when in reality it shows a rise toward the peak. College students back then studied and had a part-time job. By the early 2000s, I remember feeling weird for having a 15-20 hour job during junior and senior year of college, as most of our peers not only did not work, but were not even interested in it.

Furthermore, going to college these days is not a demanding thing that would eat into work time. Grade inflation means you'll pass all your courses. If you paid for the credits, you'll get the credits -- that's how the administration views customer service and growing its consumer base. It's mostly a screw-off time. Not, however, in a social way -- visit any college these days, other than the most hardcore party schools, and you'll be struck by how atomized the student body is. And how they like it that way. "Other people -- um, cuh-reeepy!" Rather, they're all plugged into their phones, laptops, or video games.

Spending time in higher ed when you are not intending to secure, or are not cut out for an academic job, is just as much an outlet for cocooning as it is a grab for higher status through credentialing.

Related post: Did you have a job as a kid? My first job was at age 10, during the summer of 1991. In '92 and '93, I got lasso-ed into splitting the labor (and the pay) with my best friend who had a paper route. Looking at the graph above, this couldn't have lasted long for kids that age.