This afternoon I dropped by the local hipster barber shop, and began chatting with the girl cutting my hair. The conversation got around to movies, and she said the best film she's seen recently was... The Lego Movie.

No, she was not a kindergartner who had switched places with her mother for Bring Your Daughter To Work Day. She was a youngish Millennial, 24 or 25, and dressed on the skater / grunge side of the Urban Outfitters crowd. Not obviously nerdy. She didn't strike me as unusual for people in her generation. That's just the way that 20-something tastes are heading these days -- toward the juvenile.

You could forgive them somewhat for having such tastes when their helicopter parents kept them under lock and key in the house all day, every day. They should've at least started to rebel against that during adolescence, though. But not only did that not happen, they're trying to keep themselves stuck in childhood even when they're out of the house and can check out and get involved in whatever cultural trends and scenes that they want.

If you have Millennials among your Facebook friends, you may have seen pictures like this when the final Harry Potter movie came out a few years ago. Remember, these folks are in their late teens and early 20s: 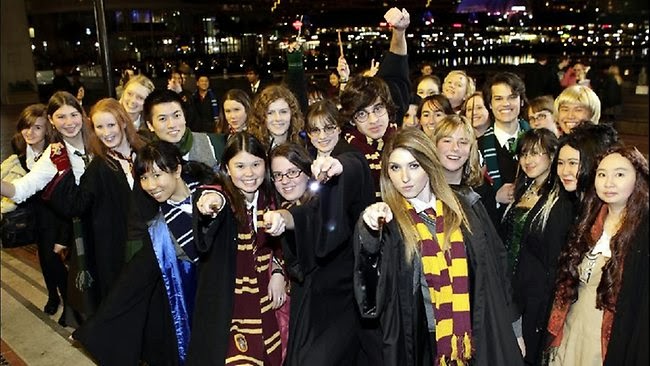 One of the most popular channels on YouTube, with nearly 2.3 million subscribers, is Superwoman, a Punjabi girl from the Toronto area. Although she too is 25, and does touch on more grown-up themes like dating, a lot of it is conflict with parents (who she has never moved away from), and a good portion of her pop culture references are to kiddie stuff for the early Millennials (Barney, Power Rangers, etc.). Whenever she apologizes to the audience for, say, uploading a video later than promised, she says "Saw-wee" like a child.

She can be funny, she's empathetic and can put herself into the minds of other people, and she isn't ugly. So why so juvenile? It's not just the total outcasts and rejects who are retreating away from growing up these days -- even the pretty, popular type is likely to stay this way well into their mid-20s.

I wouldn't characterize the way the kiddie Millennials feel as enthusiastic, as though their brains were still exactly the same as when they were children, nor would I say it's angry, rebellious, or something else that would merit the term "refusing" to grow up. It's more of an uncertainty about where they're going, and a profound awkwardness of someone with a child-like mind inhabiting a more grown-up body and doing more grown-up things like living away from home and/or working.

They feel uncomfortable away from the cocoon of their helicopter parents' home, and they want to do whatever they can to make it feel like they're still a child that's being taken care of by mommy and daddy, and that doesn't have to deal with the awkward adolescent stage of becoming more socially connected and autonomous. In their cultural lives, their plan is to just hide under a pile of blankets until adolescence goes way. Hence their preference for the cutesy, the campy, and the innocuous.

It's an unsettling repeat of how the ethnographers of the Silent Generation described them way back in the original Time magazine article from 1951 (unfortunately no longer available online). Now, inequality and status-striving were falling back then, so folks in their mid-20s could move out of the house and start a family, rather than try to realize their dreams of establishing the awesomest most epic career ever -- BECAUSE I DESERVE IT, OK DAD.

Still, the observers back then noted the Silent Gen's lack of purpose or goals, their uncertainty and anxiety, and their feeling uncomfortable with growing up, performing their duties, and moving through life's stages. As with today's Millennials, I think yesterday's Silent Gen turned out that way because of the Dr. Spock zeitgeist of the Mid-century, and the socially stunting effect of their "smothering mothers" (as helicopter parents were called the last time around).

It's easy to forget what cultural tastes youngish people had back then, because most of it was not cool enough to be retained into future generations (particularly after the '60s). As one brief but telling example, remember that in 1953 an annoyingly cutesy-kiddie song stayed at #1 on the Billboard charts for two whole months, and won the #3 spot on the year-end charts -- "(How Much Is) That Doggie in the Window?" Such a song could not have enjoyed such success during the Roaring Twenties, which were more like the Eighties.

Related: an earlier more in-depth post on the cultural tastes of Mid-century man-children.