As part of their early '90s revival, Urban Outfitters is trying to push high-waisted shorts for girls that end just under the butt, AKA daisy dukes. It seemed like it was mostly the chicks working there who were wearing them, whether they were required to promote the product, or whether they're more adventurous than the average girl today in showing a little leg.

Hot pants, dolphin shorts, daisy dukes -- whatever they used to be called, they gave off a fun-loving yet wholesome charm that you don't feel anymore when girls wear shorts. Let's see how they pulled it off by checking out the original Daisy Duke herself: 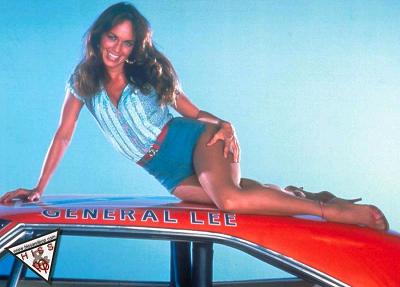 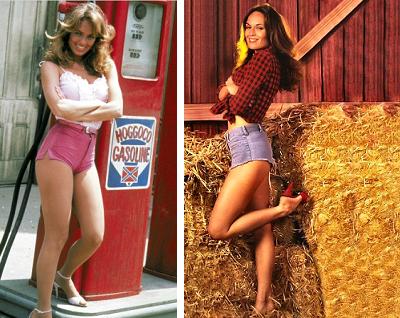 (Back when girls wore slender heels instead of blocky boots...)

High-waisted shorts and pants do create a "long butt" effect from behind, their only real downside. I guess in the good old days, guys were more interested in looking at long legs than a plump rump. Or perhaps they figured they'd get to see it all in good time, and for now it was better to get more of a hint or tease from scoping out her legs. Build some anticipation.

Whatever their reasons, shifting focus from T&A to the legs does serve to somewhat de-sexualize male-female relations. The girl doesn't feel as on-display if she's only showcasing her legs, and the guy doesn't feel as self-conscious of his own dirty mind when he's only checking out her legs.

A focus on T&A seems to go more with society-wide anxiety / neurosis, as we last saw during the mid-century. High levels of self-awareness during the Age of Anxiety can be seen in the "sweater girl" wearing a bullet bra, and the pin-up girl sticking her curvy butt out while staring knowingly at the viewer. It's a bit too vampy, pretentious, and obvious.

Over the past 20 years, the focus has returned to the mid-century pattern, a topic I looked at earlier here. Now it's underwire / padded bras and J-Lo / Kim Kardashian booties in yoga pants. And as part of the general change toward a more-covered-up look, shorts end further down the thigh than they used to: 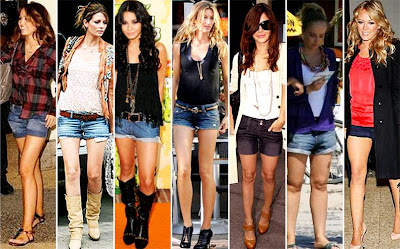 Compared to daisy dukes, these new shorts make the girl look a little less comfortable with herself, which you can confirm by observing their facial expressions. To emphasize the butt, the waistlines have come way down as well (though they've recovered from the Whale Tail days of the early-mid-2000s). Low waistlines don't mean they're actually baring their waist, of course, just trying to draw more conscious attention to their ass. As you can see in a few of the pictures, trying to have it both ways -- low waist and high-cut -- makes the shorts look like a thin skimpy stretch of fabric.