Shot on location for Scarface, where it plays as the Babylon Club: 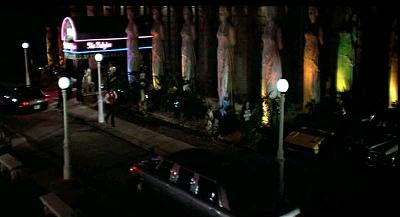 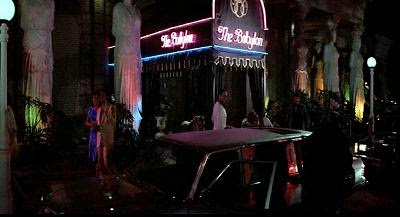 It's nothing to shout about, but still the eclecticism looks carefree and playful, taking part in the fun-loving, coked-up party culture of southern Florida in the 1980s. Compare to the more campy Piazza d'Italia, another place that combines the classical with the futuristic: because the latter is so much more spastically self-conscious -- "Hey guys, dig what two styles I'm combining -- it appeals to critics, who believe that a work must always "say something." Whether they like it or not, it at least garners their respect for Saying Something, so they include it in architecture history books as an exemplar of Postmodernism. *

Critics seem to be numb to pleasure, especially the guilty kind, where you're going with the flow and not thinking or asking any questions, just letting your senses play around. They prefer the opposite of a guilty pleasure -- something that you cannot enjoy, but that on a conscious, rational level, you tell yourself that you should, usually on the basis of some authority who proclaims, It's a Very Important Piece (git the fuck outta here!).

*Not really that dopey when referring to architecture, as long as you steer away from the superstar architects and look broadly at the visual culture back then, kind of like how Art Deco had no celebrities, manifestos, or other forms of attention whoring.