I'm going to split up this topic into more digestible posts because there'll be plenty of pictures, and if the past is any guide, lots of text too.

Somehow we have all perceived that gays have a pattern of facial expression that's different enough from normal men for there to be a fuzzy yet discernible range of gay faces. In fact, right now, make the gayest smiling face you possibly can. Go ahead...

I'm willing to bet that most of you worked in some element of the surprised face – eyebrows straight up, upper eyelids raised for a wide-eyed stare, or perhaps dropping your jaw and/or opening your mouth, though without any tension in your lips, like slack-jawed.

Here are two prototypical gay smiling faces that use each one of those elements of the surprised face, the first an HIV-positive contestant from Project Runway, and the second a queer who plays a nerd on Big Bang Theory: 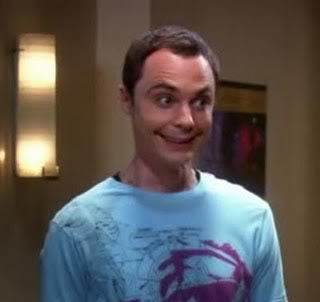 Go through pictures of homosexuals in google images – with the safe search ON – or watch them on TV or movies, and if you're surrounded by them where you live, as I am, just observe the range of expressions. The surprised face is one of the most pervasive features of their looks. They don't always project it in such caricatured fashion, but they are far more likely to blend pieces of it in to any given expression than a normal person would be. And that means a normal male or female – females older than 10 years old don't go around lifting their eyebrows up in any old context, normal males even less so.

Rather, the people they resemble in this way are small children. It is thus one of their many Peter Pan-isms, something unexplainable by appealing to theories about their being feminized or hyper-masculinized. Instead they are infantilized. Little kids have so little experience with the real world that they are in a more frequent state of wonder than grown-ups are.

And that's especially true for the world of social interactions, where they're often unsure of how they're supposed to behave. When a social interaction is going along well, they're shocked and excited that they haven't messed it all up – un-self-conscious social interaction is not something they take for granted, being so immature. So they respond with more frequent surprised signals on their face. Omigosh, you mean I did it right?!?!?!!! Yay me!!!!

In such a context, gays even clap their hands excitedly more than normal men do, for the same reasons as they show the surprised face, again appearing like small children. The difference is that normal onlookers read their expressions as silly and airheaded instead of cute because they're so embarrassingly age-inappropriate. (Though of course plenty of fuck-ups collect faggots as friends because they find emotional stuntedness endearing.)

In a post to follow, I'll look more at their seeming inability to produce a joyous smile, it always being tinged with nervousness, surprise, anguish, and more rarely fear or disgust. Then I'll turn to their tendency to use the disgust face where normal people would use an upset face. The common theme will be Peter Pan-isms, and the emotional trainwreck that a child would turn into if forced to interact in an adolescent or adult social world. Pressure overload!
Categories: Gays