Video games' place in the realistic vs. stylized visual zeitgeist

The usefulness of the idea of "a visual culture" is that similar trends tend to affect so many seemingly separate areas. That is why, without having seen them beforehand, you could easily group together an ad, an album cover, a book cover, and a movie poster from 1954, and ditto for 1984, with little confusion between the two groups.

One area that tends to get left out of these surveys is video games, which doesn't sink the whole approach -- it's just one not very crucial area. Still, they're worth including since they do move with the overall zeitgeist, providing stronger support for claims that "the look of 1994 was such-and-such a way." And they have come to occupy an increasingly larger place in the visual media that people are exposed to.

Without going into the broad pattern, which would be another much longer post, I'll just state that in falling-crime times the visual culture becomes more photorealistic, whereas during rising-crime times it becomes more stylized. Rising-crime periods were the Romantic-Gothic of ca. 1780 to 1830, the Art Nouveau and Art Deco periods of ca. 1900 to the early '30s, and the Psychedelic-New Wave periods of the '60s through the '80s. Falling-crime periods were in between: the Victorian era, the mid-century, and the past 20 years.

Why artists and their audiences respond those ways to the rising or falling trend in rates of violence is another matter, not really worth exploring here, again to save space. The basic reason I see is that in times when the future looks less stable and predictable, people value imagination more in all areas of life, not just visual culture. Since the old ways are apparently not working as planned, people hope that outside-the-box thinking will lead to new solutions. It's not experimentation for its own sake, a useless "skill," but more like creative improvements that began with trial-and-error.

Let's take a look then at the change in how realistic vs. stylized the typical video games have looked since they became popular in the late 1970s. I'm mostly going to link to galleries, a) to save space here, and b) to not have to make and upload my own image files.

In the beginning it was arcade games that had the greatest graphical capabilities, and hence the most choice for the creators. Popular games from this time are all stylized, e.g. Galaga, Ms. Pac-Man, and Robotron: 2084. Even the artwork on the stand-up cabinets that housed the games were highly stylized, showing that the makers and target audience wanted that look. If they had truly wanted a realistic look, the game itself might still look somewhat stylized because of technological limitations, but the artwork on the cabinet meant to draw players close would have been photorealistic.

I'll return to the "technological limitations" point in a sec, as it turns out there were some old arcade games that were capable of showing live-action video footage, but chose to show hand-drawn animation instead.

As for more recent popular games, they are almost always as realistic-looking as the technology will allow, and the artwork on the front of the box is that way too (often not even done in a separate style, but just lifted directly from how the game looks itself). That doesn't mean they do not ever show fantasy environments or creatures, only that these too are portrayed photorealistically. For example, Grand Theft Auto IV, Call of Duty: Black Ops, and The Elder Scrolls V: Skyrim.

When did the shift begin? As late as 1991 (just before the peak in the crime rate), a smash hit like Sonic the Hedgehog was still heavily stylized, even though the technology allowed for more realistic graphics. Just around then, though, the hit games started going for digitized copies of video-captured actors, such as Mortal Kombat. Some went for full-motion video altogether, like "cutting-edge" failures on the Sega CD, 3D0, and computer platforms.

But a more insightful approach is to look at video games made for a much older medium that allowed live-action video to be displayed, and see how the creators and audiences chose to make use of it. That way we can be sure we're not confusing aesthetic changes for technological changes. Only one medium like this was used back through the early days of arcades -- the laserdisc.

Here is Wikipedia's list of laserdisc video games if you want to look for yourself, but I checked them all. Most of the games from the first half of the '80s are entirely animated and stylized, at least to the degree you'd seen in a Disney cartoon from around that time. Don Bluth, the artist for the most popular such games, Dragon's Lair and Space Ace, was a former artist for Disney and had formed his own animation studio by then.

It would have been impossible for the animators to draw the images live while the player moved the character this way or that, took this or that action, etc. So these games were more like interactive movies, where you must perform a fixed action when prompted -- if you pull it off, the animation sequence proceeds, and if not, the relevant death scene is played. (These are the ubiquitous "quick-time events" of recent games.) You might also have a choice of where to go at certain fixed points in the narrative. By limiting the player's control, they could store all the animated sequences on the laserdisc, and jump to one or another depending on simple predictable actions the player took.

The few such early laserdisc games that weren't entirely animated only used live-action video to capture background environments (e.g., filming a sky with clouds to use as a background for a flying game). The objects involved in playing the game (e.g., the plane and any enemy planes) were still the stylized hand-drawn or computer-generated sprites that you'd see in other games from that time.

Later, during the first half of the '90s, American Laser Games released many laserdisc games, all of them showing live-action video footage, not traditional animation or even CGI. Like the earlier ones, they had to store all sequences on the disc, and jump to one or another based on simple actions the player took. Unlike the earlier ones, the player didn't just have to push a button in time -- using a light gun, they had to accurately shoot a spot on the game screen where an enemy was. If they hit him, the video sequence of that guy falling off the roof or whatever would play, and if not, some kind of failure video would play.

If you were still hanging out in arcades during the falling-off-a-cliff period of the mid-1990s, you might remember one of the Mad Dog McCree games, which featured point-of-view video footage of a vigilante who confronts a band of outlaws in the Wild West. 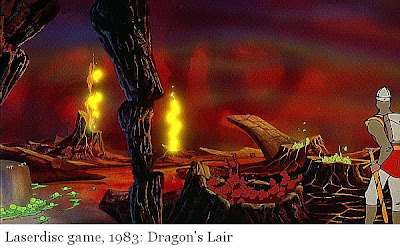 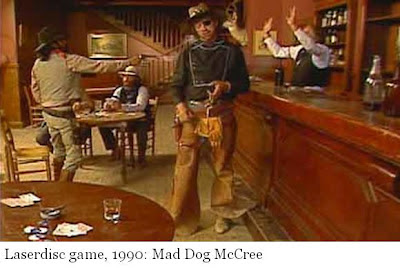 Since the laserdisc technology allowed for either the more photorealistic approach of live-action video or the more stylized approach of hand-drawn animation for children, we can be sure that the aesthetic changes from the earlier ones to the later ones are not confounded with technological changes. During rising-crime times, the stylized look was a no-brainer. As the crime rate began to peak and decline, the visual culture shifted into realistic mode, and it has only gone farther up through today.