Part 2 will discuss the mid-century.

Earlier I looked at the drive-in culture of the mid-20th C. and the past 20 years as a sign of how socially avoidant people are during falling-crime times. Bustling dining rooms emptied out as customers began ordering from and eating their meal inside their car. And just sitting next to others in church was too close for comfort for those who preferred to pull into a drive-in to hear the Sunday sermon.

That was one way that people who wanted to be isolated from others still managed to get some things done outside the house. But what about while they were home? The first response of a cocooning population is to simply withdraw as much as possible from public spaces. But it soon becomes apparent that just staying home doesn't totally sever the connections to your broader community. How do people modify their houses and yards to further achieve a longed-for isolation?

Look around your neighborhood today, and you will see stockade-like privacy fences everywhere -- even if like me you live in a very white middle-class area, where there is zero threat of Comanche bands raining destruction in a surprise pre-dawn raid. The fences are high (usually at least 6 feet), totally opaque (no space between planks), and surrounding most or all of the sides and back of the house.

I rarely see them in front, probably because people don't go out front anymore -- too much exposure to the neighbors. If kids are allowed to play outside at all, it is in the back yard, and grown-ups too have retreated from the porch in the front yard to their deck in the back.

All that you need to shield your private space in front is a set of blinds, such as the ubiquitous vertical sliding kind that snap completely shut. A kind of retractable, vinyl privacy fence. Blinds now block out even smaller and less visible windows, like basement windows. 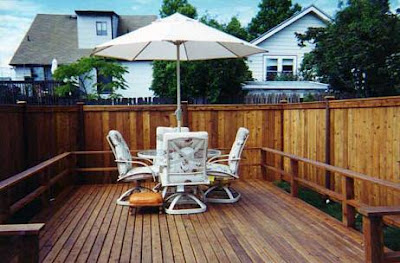 We already can sense that these are all fairly recent developments, but to get a better feel for when they took off, I searched all American newspapers in Lexis-Nexis. Privacy fences in the '80s seem to have been used mostly by celebrities who wanted to live unnoticed. Reports of their popularity start trickling in during the mid-'90s, and by 1996 the practice is talked about each year. The same goes for building decks: they have always existed, but it's not until the mid-'90s that articles portray a mania. For window treatments, too, it seemed like the mid-'90s was when blinds began to noticeably replace less opaque things like sheers and lighter curtains or drapes.

To summarize the change over the past 20 years, then, first we just stopped going so frequently to public spaces like restaurant dining rooms, arcades, dance clubs, parks, and the apotheosis of the built public environment -- the all-under-one-roof mall. All of those saw declines by the early '90s. So now we're sitting at home a lot more, but we still feel like at any moment the public could just come on over and see what we're up to, maybe even try to socialize with us. That led to privacy fences and blinds on all the windows. Having abandoned public spaces, we tried as best we could to recreate a leisure space in our back yard, focused mostly on our deck. Hanging out more in back only compounded our desire for a privacy fence.

The scan of newspaper articles rings true to me. We had a deck put in during the mid-'90s, and the privacy fence went up a couple years later (before, it was a 3-foot chain-link fence -- without vinyl strips inserted to block out the space). We must have been late to the trend of vertical blinds in front and blinds on all other windows too, which I don't recall until the early or mid-2000s.

Growing up in the '80s could not have been more different. Our neighbors to one side did have a line of tall hedge trees, but they didn't look offensive, and although they lived on a corner lot, they did not wall off either side adjacent to the streets. Nothing at all separated us from our neighbors on the other side (where the high school guy who cut our lawn lived), and our houses couldn't have been more than 30 feet apart. Nothing kept us apart from our back yard neighbors either. Their collie occasionally wandered over to our back door, and we'd let him in. Sometimes my brothers and I left our toys near or across the border between yards (wherever that was), and our neighbor in back would bring them over to my parents so they didn't get lost or broken.

It wasn't unusual for kids to have birthday parties out in the front yard either. My brothers had one with several tables, decorations, boxes, wrapping paper, and presents all over the place. I'm sure anyone walking, biking, or driving by thought it looked like a mess, but seeing some neighborhood kids enjoying themselves at a birthday party must have made up for it. We'd definitely feel self-conscious trying to stage that today for my nephew's birthday. It's so rare that I had to pinch myself last week when I walked by a house where there was a kids' birthday party out front. Probably the first one I've seen in 20 years.

I don't remember blinds at all. Maybe some thin curtains, but mostly I remember sheers -- those let plenty of light in, yet they were gauzy enough to keep outsiders from having a crystal-clear view of your home. And we never thought of putting in a deck or an extensive paved patio. The most that we did to alter the natural look was to set up some small-scale gym equipment. It was one structure no taller than 6 feet, with a slide, a swing, and a teeter-totter (back before they were banned). It had no foundation laid overtop of the ground and wasn't anchored into it either.

This relative lack of physical barriers made it easier for people to look out for each other too -- how can I keep an eye out for my neighborhood if I'm inside and walled off by blinds, or if gigantic fences keep me from seeing suspicious things going on in other people's yards? Now we're happy to just let each person look out for themselves. And no, we weren't constantly scrutinizing every last little detail of our neighbors' open spaces -- just keeping an eye out, keeping them in mind. Only a spastic shut-in would equate open spaces with neighbors continually spying on each other.

My friends' houses didn't have much in the way of palisades and trip-wire either. We roamed all over the neighborhood, and I don't remember strangers' houses being sectioned off from one another. I guess that's what made it so easy to explore the neighborhood. Sometimes you'd see low picket fences (with planks spaced apart), or low chain link fences (again without the vinyl slats), or if they were really wealthy they might have a low stone wall out front. Some people might have had a little patio out back, but I can't recall anyone who had a deck.

To end on a morbid note, I wonder if that's part of the reason why we don't bury our pets in the back yard anymore. If it's bearing a lot more of a burden as a place to entertain and escape, in the absence of going out, then it would really kill the mood to look over from the deck and see where your pets were buried. We were a little more sentimental about ours (cat people), so in our back yard off on one side you would've seen three small wooden crosses with their names written on them.

I originally planned to write just about the most recent rising and falling-crime period, but I stumbled on a landscape architecture book that has a chapter entirely on the obsession with privacy in home and yard design of the mid-century. It's eerie how contemporary the pictures look, and how familiar the tone of voice sounds in popular writings about the ideal design. That post should be up soon.