Having gone over the motivation last week, let's look at when great actors were born, and so what kind of world they came of age in. I'm using AFI's nominations for their 100 stars list, which includes 250 men and 250 women. I don't care who ranked where, just whether or not they made the nominations. They're all classical Hollywood stars, so no one is born after 1950. Perhaps they didn't want to take a stand on more recent actors, whose achievements may not be clear yet. It's also nice because it allows us to look at the pre-1950 history of America, something we're pretty blind to.

Here is the distribution of their birth years, smoothed using the average within a 5-year window around a particular year. The top shows men and women combined, the bottom with men in blue and women in red. 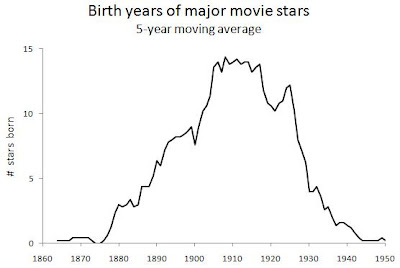 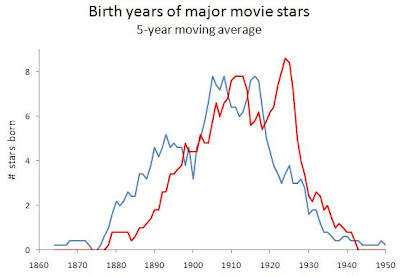 The production of future great actors takes off around 1880, peaking around 1918 after a 10-year plateau, and falls off after. There is however a brief upward blip around 1925.

In the last post, I'll discuss and interpret these patterns. For now, I'll just note the near absence of the Silent and Greatest Generations. Since roughly 60 years separates two similar points in the zeitgeist cycle, the actors born during the peak period in the early 20th C. correspond to Generation X from later on.