The Art Deco revival during the New Wave Age

The post below on changing car shapes during rising vs. falling-crime times got me thinking about design in general. Later I'll write up something more detailed about how architecture changes as the violence rate swings up or down. For now it's enough to note that when people see the world getting more dangerous, they want and make visual art that has more color, ornamentation, and allusions to figures from popular legends and mythology. When the world gets safer, their art becomes more drab in color, stripped of ornament, and cynical or dismissive of Romantic allusions.

Art Deco exemplified this pattern during the early 20th C. crime wave, which began no later than 1900 and peaked in 1933. It belonged more to the second half of that wave, the Jazz Age, when the apocalyptic zeitgeist had set in. Here are a few examples from graphic design and architecture: 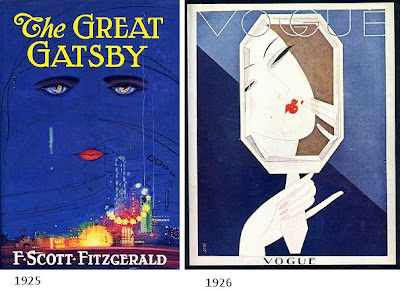 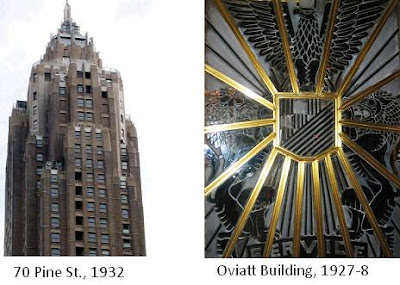 As the violence rate fell after 1933, the movement fell out of fashion and was replaced by its antithesis, Modernism or the International Style. This change in building and urban planning dovetailed perfectly with the ideology of the New Deal, corporatism, and managerialism of the mid-'30s through the late '50s.

During the '60s and '70s, the crime rate started shooting up again, and immediately people began grumbling publicly about Modernism and looking back to the earlier 20th C., when color, ornament, and Romanticism were not considered crimes. As then, though, it wasn't until the second half of rising-crime times, the apocalyptic period from the mid-'70s through the early '90s, that Art Deco was fully resurrected. *

Notice the similarity between the cover of The Great Gatsby above and the poster for Chinatown below, and between the Vogue cover and the album art for Rio by Duran Duran. The look of the new wave music scene in general borrowed a lot from Art Deco, consciously or not (again some of this is just due to similar impulses expressing themselves in similar environments). You even see it in campier places, like the unforgettable giant wall stencil of Billy Idol, accented with neon lights, from Jules' apartment in St. Elmo's Fire. 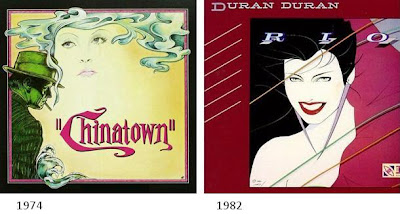 Although not a perfect example of the revival, the styling of the Pontiac Firebird Trans Am in its later second generation is worth mentioning because it was so popular, immortalized by the 1977 movie Smokey and the Bandit. It's all there, from the geometrically stylized snowflake rims to the mythical creature on the hood (compare the detail from the Oviatt building above). They came in probably the widest variety of colors in the history of cars. 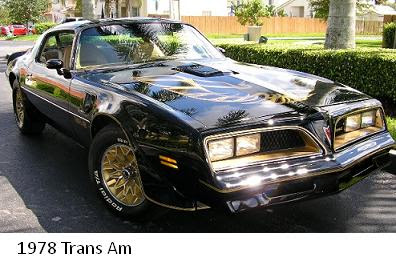 And of course there was the new Art Deco movement within architecture, sometimes a more straight-up revival and other times the basis for a wackier project within Postmodernism of the '70s and '80s. Not that I've seen any of these in person, but my favorite is the NBC Tower in Chicago: 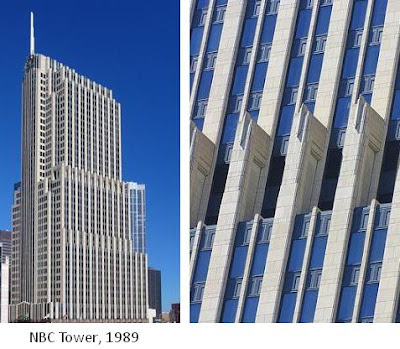 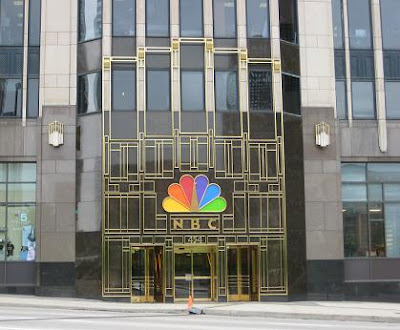 After the 1992 peak in the violence rate, there would still be some buildings in the pipeline conceived during rising-crime times, so the mid-'90s weren't so bad for architecture, unlike music, movies, and other industries that rely on creativity even in the execution, not just the conception, of their works. But over the course of the '90s the Deconstructionist movement became dominant, and things really got rotten during the 21st C.

The fanboys of Frank Gehry, Rem Koolhaas, Zaha Hadid, and Santiago Calatrava claim that this trend is part of the Postmodernist reaction against the previously mentioned Modernism / International Style of the mid-20th C. In fact we've gone back to the time when there was minimal or no color or ornament, a cynical view of mythical or other allusions, and a haughty dismissal of the needs of human nature, including aesthetic ones. The only difference is that Corbusier v.2.0 is shinier and sometimes curvier.

If the current period of falling crime rates lasts as long as the last one did, society will get more violent around the beginning of the next decade. It could take 15 years after that before the apocalyptic zeitgeist sets in again. Perhaps by the '40s, then, we'll have finally removed this Deconstructionist tumor and see the third flourishing of Art Deco. First it was jazz, then new wave -- I can't wait to find out what the next new music style will be to provide the soundtrack.

* Two similar points in the zeitgeist cycle are separated by about 60 years, for example the peaks in the homicide rate in 1933 and 1992. So we should not be surprised by the similarity between the Roaring Twenties and the Go-Go Eighties.