I wish I had access to all the pictures back home so I could begin to provide some visual documentation of the major differences between falling and rising-crime times, aside from the obvious ways like how scary strangers in cities used to look. Luckily one of my brothers just scanned some random photos from awhile back.

During the shift toward pacification and infantilization over the past 15 to 20 years, we've lost sight of the good that came along with the bad in more dangerous times (such as, for one thing, the opposite of infantilization -- growing up faster). Someone needs to preserve that in the collective memory, especially for the mid-'70s through the early '90s because most of the Baby Boomers assume that, for example, children riding in the bed of a pickup truck (no car seats, no seatbelts) stopped in the 1960s, whereas in reality it continued right through the 1980s and early '90s. * They were too old to be in touch with what young people were going through then, and so have no direct memory of how kids were as wild or wilder than they were in the '60s and early '70s.

I've only got two pictures, but they do relate to topics I've yakked about before. First, a reminder of how teenagers over the past 20 years have voluntarily dropped out of the freedom-for-youth culture ("fight for your right to party"): 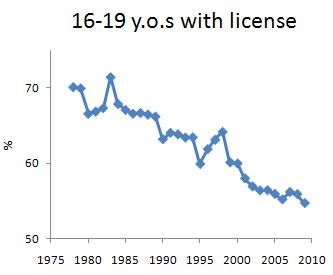 Helicopter parents wanting to keep their kids out of the driver's seat are one side of this, but the kids themselves bear some blame too for not finding a way around their parents' prohibitions like young people used to do when disobedience came naturally.

Now only about 40% of 16-17 year-olds have a license, which means that most of them have probably had no real driving experience at all. Contrast that with this scene from I'm not sure, but looks like 1993 or '94: 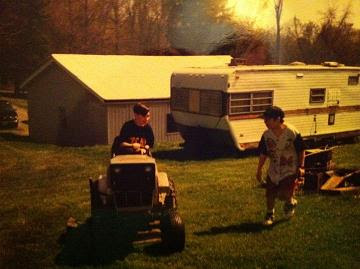 Those are my twin brothers, either 11 or maybe 12 years old at the time. I got to drive the tractor around age 10 also, several years earlier. I'm not sure if I'm taking the picture or my mother, who would've thought nothing of pre-pubescent kids driving a motor vehicle around my grandparents' back yard. As I recall, we got to turn the ignition, while my grandfather put it into gear, and then we got as much experience as we wanted using the steering wheel and giving it a little gas. I don't think it went over 10 mph, but we didn't care -- it was more about being in control and roaming wherever we wanted, rather than just where our parents would take us.

Before I detailed my summer job at age 10, a now extinct practice in the age when parents push their children to remain frozen in a pre-rite-of-passage state until middle age. My brother too had something of a job at that age, although he didn't put as much sweat into it as I did mine. Still, here's proof that as late as 1993, 10 year-old kids tried to enter grown-up world as soon as possible: 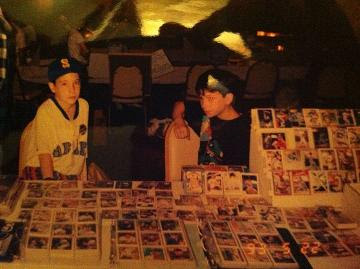 This was at a small baseball card convention held in a local church basement. He also sold them out of his room, which he advertised with a sign in his street-facing window. He's on the left, and that's me (age 12) helping him hold up the fort on the right. You hardly even see kids selling lemonade by the roadside anymore, or setting up their own garage sale to clear out old toys and books and other junk. He even had his own cash register, just like the ones that grown-up businesses used, because he didn't want the experience to be kiddie and fake.

The falling-crime times of the mid-'30s through the late '50s could never have produced a fifth-grade entrepreneur like Alex P. Keaton, notwithstanding the nonsense on all sides about how that character was supposed to represent a throw-back to that era. In reality, as reflected in A Christmas Story, Brighton Beach Memoirs, Radio Days, and Leave It To Beaver, kids of the mid-Depreesion through The Fifties were sheltered dweebs whose helicopter parents would never have approved of them joining the adult world so fast. The same was true during the falling-crime times of the Victorian era, famous for busybody adults crusading to end child labor so that they could learn all day long (yay).

So, whatever bad there may be when the world gets more dangerous, it also causes people to mature -- it puts the whole society to a test. It's a bit unreal to think that at the tail-end of rising-crime times, my brothers and I were more grown-up at ages 10 or 12 than the average college freshman is today, who's probably never had a paying job, driven a car (especially without a seatbelt on), or played his first game of "I'll show you mine if you show me yours."

It will be fun and interesting to see what happens when the Millennials are the ones in charge of running everything in 20 to 30 years.

* And regarding vehicle-related craziness in fiction, Footloose blew Rebel Without a Cause out of the water -- Ariel straddling two racing cars, one of which was headed toward a semi; the game of chicken with tractors; Ariel's train-dodging stunt; and the narration of a game of "highway tag" that ended with both cars tumbling over a bridge, killing Ariel's brother, and sparking the recent crackdown on wild youth behavior.