We've all noticed more cremations in real life (whether first-hand or from reports), as well as more references to them in popular culture (such as the end of The Big Lebowski). I thought at first that this was a feature just of the '90s and 2000s, along with all sorts of other New Age-y and sacrilegious crap that can only flourish during a falling-crime era when people become more superficial and complacent, as during the earlier falling-crime times of Renaissance Humanism, the Age of Reason, and the Victorian era.

I've shown before that people's thought drifts in more mystical directions during times of increasing violence rates, and they are more concerned with the supernatural, the sacred, and so on. But some trends toward profanation are too strong for even a wave of violence to shove back in a more sacred direction: 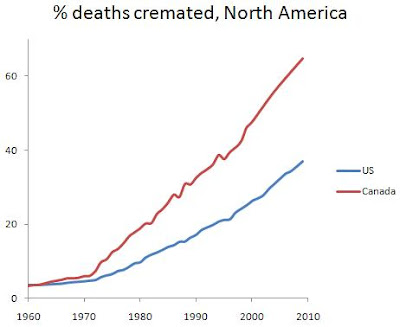 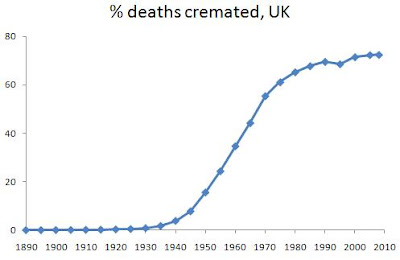 The North American data show an exponential increase regardless of whether it was a rising or falling-crime era, and neither do the UK data reflect any of the crime waves, rising logistically from the end of the 19th C. (the growth was ever-increasing even from the beginning to 1930, which looks flat on the overall scale). * Since the UK has been secularizing for much longer and at a much greater intensity than North America has, it's no surprise that they've already reached about saturation level, while we still have a ways to go, especially in America. See this map of US states by cremation rates, which looks very much like a map of traditional vs. progressive values.

Because the trends over time are so widespread and go back over 100 years, we can throw out all sorts of desperate rationalizations that the body-burners grasp at when a press article is written. The trend began long before funerals began to cost an arm and a leg, for example. I could only find data for the US, but here is the median cost of basic funeral services in inflation-adjusted dollars, not including the cemetery plot and marker/monument costs. ** 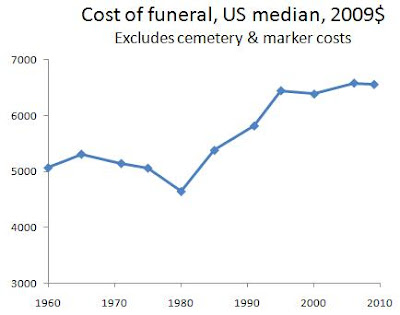 There's only been one period of price increases, from 1980 to 1995, and was flat or falling outside that time, whereas the cremation rate has been soaring the whole time. Adding in the costs of the tombstone aren't going to make the picture look different, since you can always opt for something cheap.

I don't know how much a plot of land costs, but I doubt that plays a large role because the (Spearman rank) correlation between cremation rates and (log of) population density for US states is only -0.099, so that how spread-out or packed-in people are explains merely 1% of the differences across states in how typical cremation is. Plus it's in the wrong direction according to the land-deprivation view, which predicts that the denser a state is peopled, the more they should opt to cremate instead of take up scarce real estate with burial plots.

Even worse, (log of) a state's land area is positively correlated with cremation rates, rho = +0.244, explaining 6% of the variation. The silly materialist view that the rise of cremation reflects changing availability of land would predict that states with more land should cremate less, while tinier states deprived of virgin ground should cremate more. In fact, it's just the opposite, although again the relationship is weak.

(Scatter-plots of cremation rates vs. land area or population density are not shown, but there's no visible non-linear pattern there either.)

You might as well make a memento mori moment out of this and draw up your will so that you can declare your wishes to be buried like homo sapiens have been for hundreds of thousands of years. Otherwise they might just go with the norm, which is increasingly toward blasting your remains to smithereens. In some cultures, cremation is more personal and honorable than it is in the modern West (e.g. India or pagan Europe), since at least it's done in the open air and the audience sees the body set ablaze, rather than gather only after it has been pulverized and sheltered in a clean, pretty decoration piece.

If anyone doubts whether or not the cremated remains are less sacred than buried remains (whether embalmed or not), just do a little thought experiment. (If you're a social scientist, you could ask this of subjects and publish the results.) Take the exact same person who's died, and imagine collecting their bones into a container, taking them out to a variety of places that the deceased really treasured, and strewing the bones about the places so that they could enjoy their most beloved haunts for eternity. Worse, suppose you didn't even wait for the meat and slime to be removed or waste away from the bones, but just threw fleshy body parts here and there around their favorite garden, favorite pond, etc.

Yet people feel that it's hardly sacrilege at all to do this with the cremated remains of that same person. It follows that they perceive cremated remains as far less sacred of an object than remains that are naturally decaying, embalmed, mummified, or that have left only the bones. Modern people feel cripplingly uncomfortable allowing the sacred to enter their lives -- that's just for backwards, superstitious yokels -- so they're increasingly unwilling to face the dead in a respectful way. They prefer instead to come away with remains that have only a glint of sacred power, and unlike other cremation cultures, they don't even want to witness the burning take place. They contract it out to some bunch of fee-takers who do it alone and behind closed doors.

I'm not going to dissect, in this post anyway, the psychology of why some forms of dealing with the dead are more honorable than others (e.g., are audience members close to or far away from the dead, do they bear a heavy or light load when carrying the dead, etc.), or the sociology of why some groups have more honorable funeral rites than others (e.g., a more tightly knit vs. loose social network). It's enough to say that we're headed in a really despicable direction.

And if the UK data are any guide, even if this trend will eventually reverse, it will probably take several hundred to a thousand years. There was a period in China from roughly 1000 to 1700 AD when the Confucian insistence on burial was relaxed, and cremation rose in popularity. Other episodes of the rise-and-fall of cremation also look like they took hundreds of years before people began respecting the dead again.

* North American data are from the Cremation Association of North America. They are annual and go through 2009, although 2008 is missing for the US, and for Canada the years 2001-03 and 2005-08 are missing. The UK data are from the Cremation Society of G.B. and were taken at 5-year intervals from 1890 to 2005 (plus 2008). Leaving out Ireland and Scotland, which have lower cremation rates, hardly alters the picture because the populations of England and Wales swamp the others. The shape of curve is the same, only it plateaus at a slightly lower level.

** These data are from the National Funeral Director Association's National Price List Survey. They are at generally 5-year intervals from 1960 to 2009.