This is just an empirical account of which wars our culture remembers right now, although in a future post I'll explain why the current crime level determines what type of wars we remember and are interested in.

When I was a boy my conception of war was Vietnam, although it had been over for at least a decade before my earliest memories of the world at all. The ambush in the jungle, the M16, young guys with bandanas tied across their foreheads, referring to the enemy as "Charlie," and so on. Then once the crime rate started plummeting after 1992, I hardly saw the Vietnam type of war anywhere -- suddenly the prototypical war became WWII, and only American involvement in Europe and perhaps Pearl Harbor, nothing about dropping the atomic bomb, the Rape of Nanking, the Bataan Death March, or the civil wars between fascists and partisans that tore apart many European societies.

Here it is, nearly 20 years later, and it's still as if Vietnam never happened. A point I keep emphasizing in this "safe times vs. dangerous times" stuff is that the period from roughly 1959 to 1991 or '92 is, to a first order approximation, a single unbroken period of history. (There is a second order division that I'll detail and explain later, which sub-divides the dangerous times into the 1959-1974ish period and the 1975ish-1992 period.) So, anything that made a big impact in the earlier part, such as the Vietnam War, will continue to reverberate throughout the culture until the very end of rising-crime times.

Most people who lived through the decade, and certainly those who have no memory of it, have retroactively erased the heavy presence of '60s culture during the 1980s because it doesn't make sense -- and to the modern autistic mind, if it doesn't make sense, it isn't true. And yet it is. (And it does make sense, as long as you bear in mind that the violence level was soaring the whole time.) I'm not talking about bell bottoms or taking over the student union, but the key events of the '60s, the supreme one being the Vietnam War.

So in the interest of historical accuracy, let's remind ourselves how popular the Vietnam War was during the second part of the '70s and the '80s and even early '90s, after the war had ended. Here is a list of films about it. In the table listing them, click the box with triangles next to "Country" and scroll down to those made in America. Notice how they begin right away, and more importantly that they continue unbroken through the early 1990s. If we weight the movies by how many tickets they sold, how memorable they are, how well they capture what happened, etc., we'll find that the best Vietnam movies were made during the 1980s. That's certainly true for TV shows, as there was only one -- Tour of Duty -- which began in the late '80s and lasted for three seasons.

Of course, that list leaves out military movies that show a Vietnam-esque quagmire, such as Predator and Aliens.

The memory of Vietnam was still so alive that the plot of Rambo II was all about the POW/MIA urban legend that had begun to gain popularity by the mid-'80s. By roughly 1990, this idea gained so much steam that several Congressional investigations looked into it. At the man-in-the-street level, even people who weren't Vietnam veterans, who didn't have relatives who fought there, etc., were likely to put one of these decals on the rear window of their car: 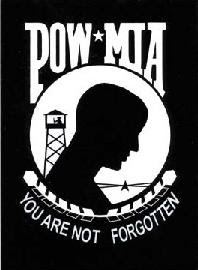 I normally didn't care about the decals my dad had on his car windows -- one as a parking permit for work, another for Ohio State, etc. -- but that one was so provocative that after looking it over a couple times, I couldn't help but ask what it meant. He retold the story to me as though he were convinced that it was a plausible legend, not fanatically sure nor wafflingly skeptical. I saw these decals on other people's cars and occasionally flags with the design outside people's houses -- they were about as common, or maybe slightly less, than yellow ribbons.

During the post-'92 period, and again sticking just with those movies that caught on, part of Forrest Gump focused on Vietnam, and We Were Soldiers was the only major movie to focus entirely on it.

Now check out the list of WWII movies. There are a few memorable ones from the 1959-1992 period -- The Dirty Dozen, Patton -- but not many, and especially not during the late '70s through early '90s. That all changes in the post-'92 period, beginning right away with Schindler's List. Suddenly there's a big WWII movie made every year or other.

To get more quantitative on the difference in interest right now, at my local Barnes and Noble there is only one shelf for books on Vietnam in the military history section, as opposed to nine shelves for books on WWII. Furthermore, just about all of the "New Releases" that hog the top shelf are about WWII, and maybe one about Vietnam. At Amazon's military history section (in books), the Vietnam category has 2,700 items, whereas the WWII category has 30,001 items. Among the best-sellers in military history, 11 of the top 20 are about WWII (more if you count alternate versions of the same book), and 0 are about Vietnam. Going to the top 40, there is a single one (at #36) about Vietnam, but that's it. The rest are about the American Civil War, the current war in Iraq, etc.

I haven't said much about WWI, but it's basically treated the same as Vietnam, not surprising since they were much more similar to each other than either was to WWII. There was Lawrence of Arabia in 1962, a TV re-make of All Quiet on the Western Front in 1979, Gallipoli in 1983, and Johnny Got His Gun in 1971 and again in 1988 when featured in Metallica's music video for "One". No big ones from the post-'92 period. In Amazon's military history section, there are 6,557 items in the WWI category and no books in the top 40 best-sellers about it. At my local Barnes and Noble, WWI gets just one shelf.

Given how long our involvement was in Vietnam, and how focal the war was during the tumultuous '60s and throughout the '80s, you would never have guessed that there would come a time when it would be more or less forgotten. And yet here we are.