When do young people appear in obituaries?

The NYT recently ran an obituary for a 28 year-old anorexic model, and you can't help but be struck by the age and year. Lifespans have been increasing for a long time now, and the homicide rate (a good proxy for how reckless young people are) has been plummeting for nearly 20 years. The most popular young deaths were back when wildness was soaring -- "the day that music died," Jimi Hendrix, Jim Morrison, Len Bias. It would seem strange if the media focused more on young deaths when they were less likely to happen, and in less dramatic fashion.

I searched the NYT for "dies at ___" for numbers 1 through 29 and tallied what years these young obituaries appeared in. (It doesn't matter if you restrict it to adults, adolescent minors and adults, or everyone under 30.) The chart below shows how many of these obituaries there were in a given year, shown as a 5-year moving average: 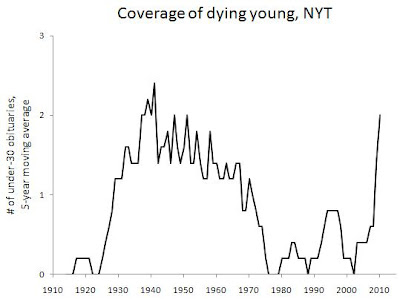 There was an initial rise in young obituaries in the late '20s and early '30s, but most of the rise and high plateau lasts from the mid-'30s through the most of the '50s, a time of plummeting crime. Once the crime rate starts to soar in the late '50s, recognition of young deaths falls off and stays low throughout the high-crime era of the '80s. It only shoots up again when the crime rate started falling in the 1990s, lasting through today.

That's the opposite pattern of the focus on young deaths in other areas of culture. Horror movies from high-crime times make you feel like it could really happen, while those from low-crime times (especially the '50s and 2000s) are too goofy or exaggerated to feel real. It's more like torture porn, where you feel like you're watching from a safe distance, not right in the middle of it all. Certainly pop music of low-crime times has little to no emphasis on living fast and dying young. Death and grieving used to be common in TV shows of high-crime times, even children's cartoons, but that's evaporated during low-crime times.

But an obituary is so much more formal and solemn than a movie or song, and my guess is the obituary writers don't want to romanticize or glorify young deaths when it's a more and more common sight. Only when the crime rate plummets and people see their lives as lasting much longer, and therefore being worth much more, do the obituary writers feel that young deaths are worth dignifying, unlike the high-crime times when people perceive their world to be on-the-brink and therefore that life is cheap.