Rise and fall of metal parallels that of pop music broadly 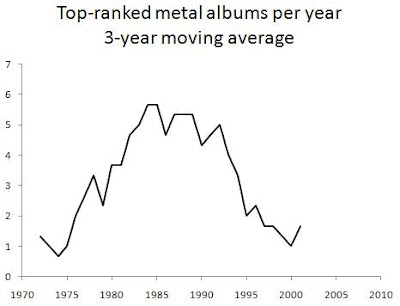 The data from that graph come from Digital Dream Door's list of the 100 best metal albums. That's exactly what my mental picture of best albums looks like, no matter the genre. There's a peak in 1983 (the Maiden and Priest sound, parodied the next year in This is Spinal Tap) and another in 1987 (the glammier and deathier sound), just like with pop in general: the new wave / new romantic / post-punk explosion peaks in '83, and then there's the '87 peak of I don't know what to call it -- Kick by INXS, Bad by Michael Jackson, Joshua Tree by U2, and much else in that year. The metal albums take a tumble starting in 1993, again just like with pop music in general (grunge / alternative / indie / emo, as well as gangsta rap).

It might seem surprising that the sacred albums of metalheads are mostly from the '80s, as we associate '80s music with sounds that they wouldn't dig. This just goes to show that how good music is depends mostly on the zeitgeist and not on the genre -- metal, pop, rock, rap, and R&B have all sucked starting in the early-mid '90s, all were out of control from '75 to '84, and all went through a twilight stage from about '85 to '90. Plus all of them experienced their growing-up phase sometime during the late '50s or early '60s through the early '70s (except for rap, which started in the late '70s).

The power of the zeitgeist is one of the most underappreciated social forces in pop culture. It's like a wind that blows through and either polishes or corrodes everything out there. I think it's given more credit in high culture -- people talk about the Elizabethan world, the Renaissance, etc., noting how the zeitgeist affected religious and secular art, painting as well as sculpture, and so on. For popular culture in recent times, we've adopted the highly misleading practice of referring to decades that begin in a 0 and end in a 9, like the Roaring Twenties or The Sixties.

But we should just see what the picture looks like for each year and group similar years together with a suggestive name, not arbitrarily split by decades. Again, the period from about 1975 to 1984 is a lot more coherent of a cultural moment than if we included the periods just outside of it, but we don't have a name for it and chop it in half to fit the Procrustean bed of decade thinking. And sometimes a decade is too long -- the roughly 5-year period of the late '80s through 1990 has its own feel, distinct from the '75-'84 period and definitely in another world from the '91 and after period. We do have a handy name for the 2003-'07 period of euphoria -- the Bubble Years, or something like that -- but in general we need better periodization.