Looking through all 24 pages from this forum topic on who your first celebrity crush was, I'm struck by how few "high school sweetheart" types there have been in popular culture since the society became safer and duller after 1991. The earliest quasi-crush on an actress I had was for Stephanie from Full House, but she and I were too pre-teenish for it to last. My first head-over-heels crush was for, you guessed it -- 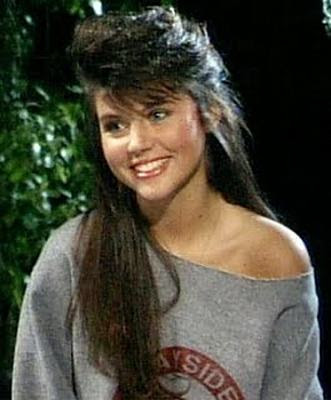 God damn... now that's gonna leave a mark. What about yours?

Even though when they first became famous I didn't see many of the other girls from the '60s through the '80s listed in that forum topic, I can still appreciate them since they're all cut from the same mold. I hardly noticed her when I saw The Karate Kid as a small child, but if I had been older I totally would've fallen for the all-American Elisabeth Shue, barely 20 years old, springing around in those gym shorts and powerless to hold back her smiles. But then in the early-mid '90s the "it" girls start to get more frigid and annoying, masculinized in the face, and tending toward the butt-kicking babe of geek fantasy (now the mainstream guy has geek tastes). There are a couple exceptions, like that Alex Mack chick who my younger brother had a huge crush on, and later Jennifer Love Hewitt. But overall the fragile, energetic sweetheart who was born to make babies has faded from the cultural landscape.

It seems that in dangerous times, we're in hurry-it-up mode and want females who look like they want to have children at all, sooner rather than later, and more of them, and who appear faithful and nurturing. It's only during safe times, when our time horizon moves much farther away, that guys come to like bitchier and colder women whose careerism and mercenary attitude toward sex mean that you'll be lucky to squeeze any children out of her at all, and even then much later and not so many in number. If she's not that maternal and caring, meh so what, the world's safe enough that she won't need to protect them from that much anyway. In a safe world, kids basically raise themselves, so mommy has more free time to go beat up aliens.

That looks like the real world, with the explosion of make-you-lose-sleep girls in the '70s and '80s, all of them about as popular as the others, compared to the tiny handful of category-dominating girls in the '90s and 2000s. The '60s didn't have too many either, but I attribute that to the under-developed state of mass pop culture at the time. If the markets for TV, movies, and pop music had been as mature as they became during the 1980s, I think the '60s would have had a lot more girls like Andy from The Goonies. Still, it wouldn't have been as great as during the '70s or '80s because the crime wave was only getting underway during the '60s and people had not totally converted to the "life is short, let's have fun" mindset.