In general trying to get two females to play nice with each other is like trying to train two cats not to chase after the same rat. As a result, females tend to have very few close friends, while males are part of much larger social networks. Still, there are swings up and down when it becomes even harder or relatively easier for girls to get along.

Following the logic of what causes females to thrash one another so viciously -- namely, competition over prized males in the mating market -- we predict that when females withdraw more from the mating market, they won't have such strong reasons to hate each other, and they'll find it easier to get along. That's why post-menopausal women aren't as catty as teenagers.

One key ingredient to taking part in any market is trust in other people -- you are much less willing to play the roles of "buyer" and "seller" if you think your partner will cheat, lie, or otherwise act opportunistically. In low-trust environments, you'll move more of these "production" decisions in-house where people can be trusted. Often that will be literally in your own house where your blood relatives live, although it could also mean doing it by yourself or with only your most proven allies. Just not with generic strangers or someone you just met.

Trust levels have been falling steadily since the late 1980s, according to the General Social Survey. And in the early '90s trust took an extra hammering from the culture war that spawned third wave feminism, identity politics, and political correctness. Who can trust men when they're all a bunch of crypto-rapists just waiting for the right moment to slip a drug in your drink? Third wave feminism has been dead since at least the late '90s, but trust levels have remained low right up through the present. We'd expect females to withdraw more from the mating market and think more in terms of forming alliances against a common enemy. Hey, you two are both cynical and distrustful towards men -- why don't you build on that?

So is there any evidence that the prevalence of female bonding has gone up since then? Sure -- this period has seen the birth and flourishing of the "girls' night out." Obviously girls have been going out together at night forever, but this phenomenon is a plan to carve out a "safe space" where they can insulate themselves from the cooties that those yucky boys carry. Here is a graph of how in-the-air this topic has been in the NYT, by five-year blocks (each point is the middle year of the five): 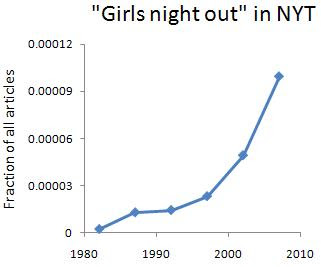 The phrase also appeared twice in 1934 and once in 1942, but otherwise is absent until the late '80s. (The only instances from 1985 and 1986 are references to a rock band of that name.) It first caught the attention of feature journalists in 1989, as seen in this article. Since then, it has only shot up in popularity, as shown by this 2003 article about the comeback of Tupperware parties among trendy Manhattanites.

Plus there's all that only mildly social stuff that hip-striving females somewhat recently started forming clubs around, like knitting and growing your own vegetables, instead of going out on dates with boys.

Sex and the City clearly fits right in with this. Wikipedia has a category page on "female buddy films" -- no joke -- and they are all from 1988 and later, with a peak in 1996. Again, it's not as though there weren't movies before then where females helped each other out or enjoyed friendship. Just not ones where they formed a co-op to better their odds in the battle between the sexes.

And of course there's "girl power" music that grew out of third wave feminism, symbolized by ego-inflated slut brigades like The Spice Girls or The Pussycat Dolls, as well as the soporific line-up at Lilith Fair. You never would've seen anything that gay from The Runaways, The Go-Go's, Pat Benatar, Debbie Harry, or any other good female rock musician. (Looking through the names of those who did play Lilith Fair, I'm sad to say that The Pretenders and Susanna Hoffs both did, though.)

The tougher ones sing about how relationships don't always work out, but to suck it up and try to get on with life, rather than huddle with a bunch of other whining women and feel each others' pain. Even the slightly downer songs from high-trust times rarely complained about "what can we do to get them to treat us right?" like Queen Latifah's 1993 song "U.N.I.T.Y" -- but instead about "what can I do to get him to love me?" like Joan Jett's 1981 cover of "Crimson and Clover."

It's ironic that all of this female bonding crap gets promoted as proof of how strong and self-confident women have become, especially since third wave feminism. Back on planet Earth, this retreat from playing with the boys only signals how weak and unsure she is of her ability to handle life's risks. It takes a stronger girl to make herself vulnerable, and those girls from high-trust times were rewarded with much more exciting social lives than the girls-night-outters of today who make an evening out of in-home strip pole dancing.