When were times most fun? Survey says...

I'm not putting this up at my pay blog because it's worth having a little more solid foundation for the narrative I've been spinning lately about how tiring the culture has become since the early 1990s.

The idea is to use survey data to see how people felt at the time, since what they feel when looking back could be biased in a positive direction if they feel nostalgic or in a negative direction if they feel remorseful. Ideally you want to take the person's pulse across a variety of indicators of fun times so that you get a richer account of what makes daily life enjoyable. The General Social Survey has three questions that I've combined into a fun index. Think of it as a checklist. The response that counts as a check is in parentheses after the question.

2) LIFE: "In general, do you find life exciting, pretty routine, or dull?" (Exciting)

3) TRUST: "Generally speaking, would you say that most people can be trusted or that you can't be too careful in life?" (Can trust)

The first two are self-explanatory. Why include how trusting people are? Well, how else are you going to go out and socialize with lots of people if all of you are suspicious of one another? Trust is the most basic ingredient of group action, and you can't have fun all by yourself. I've been talking mostly about the culture's decline in sincerity, but the implosion of trust is an equally strong factor. That probably drives the flight from public spaces that I've documented in other posts, such as not going to parks or bike-riding anymore, and it's at the root of Robert Putnam's story about the decline of community.

By the way, that's my theory for why the crime rate tracks the fun and wild vibe of the culture: when most people are trusting, they're more vulnerable to criminals -- not just by getting scammed, but simply by being out and about rather than holed up in their homes. Criminals only come out of the woodwork after most people rush into the public space. If most people are suspicious, paranoid, and overly cautious in social life, they won't be out much. A special case of this is helicopter parents not letting their kids go anywhere or do anything. With so few open targets venturing out into public spaces, criminals look for something else to do for fun and money.

Now, the whiners will object that this is just a checklist that a preppy head cheerleader would make up. But they're wrong: even if you defined yourself by the obscure music you listened to, you still searched for other people who liked that music, you congregated at the clubs and record stores where they were popular, and in general you spent a lot of time hanging out with other people who liked what you liked. In short, you had a life -- whether you participated in the mainstream or not. You felt happy, life was exciting, and you trusted people enough to do all those social things just mentioned.

To make the index, I just added the fraction of people who checked off the right response for each of the three questions. This answers the question, "If we chose someone at random, how many of the three boxes would we expect them to check off?" If everyone checked none, the index is 0; if everyone checked all three, the index is 3; in between is in between. This assumes that the variables of happiness, excitement, and trust act independently of each other to produce the overall fun level. Another way to do it is to multiply them instead of add them -- this is where each one interacts with or reinforces the others. It turns out that the pattern is exactly the same either way, so I'm sticking with the first way I drew the graph, which is the expected number of boxes checked off on the fun checklist, out of three. Here are the results: 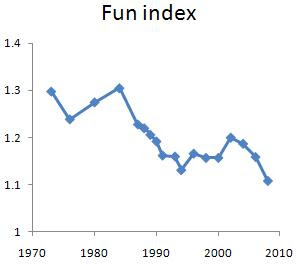 There aren't many years from the '70s that include all three questions, but 1973 is the second-funnest of the past roughly 35 years. 1976 is still up there, and 1980 -- which culturally is still part of the late '70s -- is even higher. It's no surprise to me that 1984 is the funnest year on record. That's right at the height of new wave, dance pop, breakdancing, one cool movie after another, Reagan's landslide re-election, and on and on. Even by 1987 there's a noticeable drop-off, and it slides bit by bit through 1990. Again, no surprise that 1991 is the first year of the bottoming out that you see, although 1994 was an even bigger bummer. By this time, everyone is hysterical about third wave feminism, political correctness, AIDS, postmodernism, bla bla bla, and the homicide rate reaches its peak in 1991. The recent euphoria shows up pretty clearly: 2002 through 2006 buck the trend of boringness, but as we found out, that was unsustainable and 2008 turned out to be the least fun year recorded. (Imagine if they had data for 2009!)

From the peak of 1973 or 1984 to the nadir of 2008, there was a 15% decrease in the fun index. Although the pattern is the same for the interactive model, it's measured differently, so that one shows a 38% decline. Regardless of which model is closer to reality and what the true decline is, the important message is the picture. Times were pretty fun starting at least in the mid-'70s and lasting through the mid-'80s, the late '80s (including 1990) were a twilight period, and ever since 1991 we've been mired in a sarcastic, meta, ironic, cynical hell.

I actually don't mind it so much because there are ways around it. For one thing, the late '70s and the 1980s are back in fashion, so you can socially enjoy culture that isn't so disdainful of carefree fun. (Take this early Blondie song, for example.) That gets around the problem of happiness and excitement. Trust is a much harder problem, and the only real short-term fix you have available is to move to a place that's pretty low in ethnic diversity, like the Mountain Time Zone where I am. Sure, you're giving up the higher salary, the better architecture, the more varied cuisine, yadda yadda, of diverse coastal life. But those things are laughably impotent at boosting human happiness when compared to the radiant bustle of social life made possible by people who basically trust one another.