When did meta-irony infect advertising?

Returning to the culture's decline in sincerity, i.e. all that annoying meta-ironic shit, one key area of entertainment and pop culture that I forgot was advertising. The painfully self-aware trend will show up in this area as the ad that is, like, too cool to condescend to the audience by using facts or humor or sensuality, opting instead to go so overboard in its wackiness that the audience understands the ad is winking at them. "We're too hip to be a real ad campaign." It's like the hipster trust-funder who wore a trucker hat over his fashion mullet. Example: those Orbit gum commercials.

I first remember this trend showing up in video game ads in the early to mid 1990s. Sega started it, and Nintendo eventually sank to their level too. See the Angry Nintendo Nerd's brief comments on Nintendo Power's ads (from 6:45 to 7:30). I see a 1996 date on one of the ironic ad issues.

The premise of these ads is that consumers have grown jaded, so you have to sneak past their skeptic defense system by being as uber-ironic as possible. Of course, ads have been around for more than a century, so this is just a baseless rationalization to jump on the meta-ironic bandwagon that took off during the '90s. To estimate when this idea took hold, I searched the NYT for articles that had both "jaded" and "advertising," looking at 5-year time blocks. Here is how this changes over time, where the year on the axis is the first within the 5-year block: 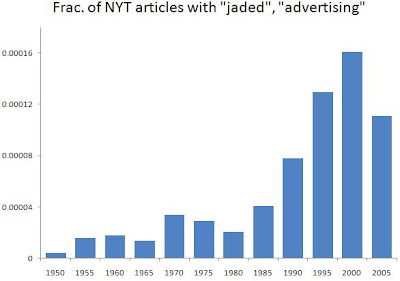 Not too much going on in the '50s and '60s, although there's a jump in the first half of the '70s, probably reflecting the late days of The Counterculture. It subsides in the latter '70s and is still pretty low through the earlier 1980s, more evidence of how refreshing the culture was then. * Overall, no sustained growth, though -- that doesn't start until the late 1980s. You can't see it in the graph, but the jump actually begins in 1988, so the mid-'80s were still in the non-self-conscious stage. As an independent check, take a guess what year Adbusters was created. (Answer here.)

Throughout the 1990s and the first half of the 2000s, there's an explosion that should look familiar based on all of the other examples of meta-irony. The latter 2000s show a decline, but it's still really high. I'd like to hope this is a leading indicator of the death of this obnoxious trend, but we'll have to wait and see. (I don't expect it to hit bottom until the middle of this decade at the earliest, and it could last until the mid-'20s.)

Finally, for those who weren't very old in the pre-screwballery days, some examples of how non-ironic ads were:

* Early in 1984, the Super Bowl commercial for the Apple Macintosh and Wendy's "Where's the Beef?" campaign came out. It sounds ridiculous to feel even the slightest tinge of nostalgia for ads -- and I can't actually feel it in this case, as I was too young to remember either of those -- but it goes to show how even the mundane things matter. It's one thing to contrast Ghostbusters with a Will Ferrell blockbuster, but how much of your time do you spend watching movies? Not as much as you do looking at ads. You don't realize how valuable ads are which are merely goofy until you are bombarded by ads that drip self-awareness -- whoa dude, I get it! It, like, knows that we're watching it!

It's a strange world indeed when the spoofs of Mentos commercials make you want to strangle the makers more than with the original ads themselves, who were only boring and maybe gay, but at least didn't mistake themselves to be clever and subversive artists.