Before we saw that there was a sharp change in the smoking habits of high schoolers around 2001, suggesting that people born in the late 1980s are the first of the Millennials -- not "anyone born in 1980 or after," as you commonly hear. Here are two more pieces of evidence for this lifestyle change occurring in the early 2000s, also from the Youth Risk Behavior Survey.

First, there's something related to the impressions people have that young guys today are more effeminate in their preferences, hopes, anxieties, looks, and so on, compared to before -- removal of body hair, for example. The main worry that a teenage girl has is that she's too fat -- that will never change -- but there's been a shift in the level of young males who are trying to lose weight (bars show 95% confidence intervals): 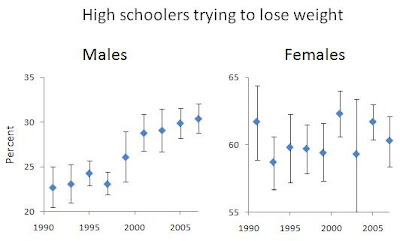 There's no change among the percent of females who are trying to get thinner, but there's a clear break among males between 1991 to 1997 values and the 2001 to 2007 values, with 1999 marking a transition year. The bars for the first period all overlap a lot, and so do they in the second period, but the second period is clearly higher than the first. It's as if a switch were flipped on sometime during 1999 to 2001, again implicating the late '80s as the birth years of the new cultural group that's visible in the second period of high school dudes.

Elsewhere on this blog, I've documented how young people today have almost nothing to do. So you'd figure that they'd at least be watching more TV -- but nope, they're not even doing that: 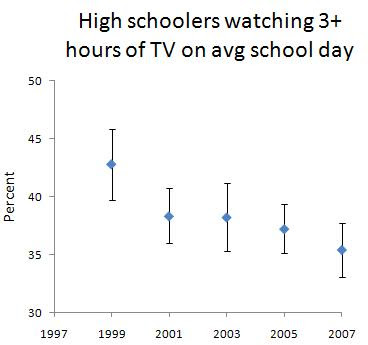 Again there's a clear break, in that the 2001 to 2007 groups overlap a lot, but are essentially all below the 1999 value. Once more it's people born in the late '80s and after who have markedly shifted their lifestyle choices from those of young people before.

It's a mistake to put too much emphasis on the new technologies that some generation grew up taking for granted. That doesn't make them into a coherent generation because it says nothing about how people use them -- only that they're background features. Things like smoking, trying to lose weight, and allocating time to watching TV tell us more about what people want, or at least how they're trying to fit in. Generational analysis needs to focus more on what people are doing and thinking than on what stuff they have.