Defining who Millenials are by cultural changes

As a 28 year-old, I notice clearly that I'm not Gen X (again, thank god). But though they're close to me and I have friends among their group, I'm not part of the Millennials either. And neither are people who are just below me in age. We're a silent generation too (roughly 1979 or '80 to 1986).

Actually, no one is fully a Millennial yet because it takes a catalyzing hysteria to make an attention-whore generation -- the mid-late '60s for Baby Boomers, the early '90s for Generation X. This hysteria leads to young people demanding that everyone drop everything they're doing and "hear the voice of a new generation." (Booorrrrinnggg.) This probably won't happen again until sometime in the middle of the next decade. Still, they're already out there just waiting to hatch and go on another feminist, identity politics rampage. It's actually kind of scary.

Anyway, the group that will be affected by the next hysteria -- those who will be 15 to 24 year-olds at the time -- will have been born between roughly 1987 and 2000. In 20 years, something like this will be common knowledge -- a cliche, even:

dude, SO glad I was born in 2005 instead of 1994 and have to go through all that leftist bullshit in college...

But before they hatch, is there any way to tell where the break in the birth year is? I think so. This will be part of an ongoing series, but for now I'll just look at smoking. Unlike violent crime and rape, drug use did not decline until about 2000 or 2001. And of course it's mostly young people smoking dope. Unlike crime, smoking is more of a health or lifestyle choice -- perhaps an ethnic marker that people in your group use to identify each other (whether your group smokes or doesn't).

The large national representative sample from the Youth Risk Behavior Survey shows us how much trouble high schoolers are getting into, for various types of trouble -- sex, drugs, junk food, etc. There are lots of questions about smoking (see here), but they all show the same pattern over time. Here is the percent of students who have ever smoked, even just one or two puffs: 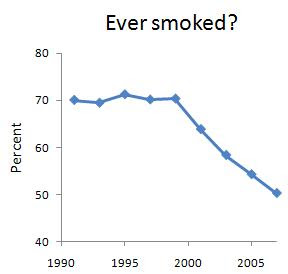 There's basically no change until 2001, when the smoking rate starts plummeting. Young people have made a huge shift in deciding that smoking isn't their thing -- old people do that. You figure it's the young students paving the way, since you're faced with the choice to take your first puff or not pretty early -- say, 14, a high school freshman. If this pioneering group was 14 in 2001, then they were born in 1987 -- which is what I guessed just by forecasting the next big social hysteria and working backwards to guess what birth years would be affected by it and so be transformed into an attention-whore generation.

I chose smoking rather than other things like crime because it's a lot closer to a group membership badge than stealing or killing is -- "is it gonna make me look cool or not?" There are other things I've found, which I'll write more about later, and they also point to roughly the late '80s as the earliest birth years of the Millennials.

BTW, there's some practical advice for when a bunch of barely legal girls come up to talk to you at '80s night (or perhaps not even legal if it's at the mall): make sure you don't smoke, or at least don't do it during that time. It'll instantly give your age away. I've never smoked, and high school and college girls always guess that I'm 22 or 23 anyway, so no big worry. But if you're a smoker, you'll seem as out of place among them as a pipe smoker would among anyone under 80.