Is the cupcake craze over?

I know that most readers are thinking, "I didn't even know it had begun." Neither had I, until Lemmonex mentioned in passing here that it had taken DC so long to become infected by it. (We're pretty safe out here in the Mountain West.) And sure enough, a Google search suggests that lots of people are talking about it, and that there are even several cupcake bars open for business, indicating that White People like them (see my take here on bars that are not bars). I've never heard of a more retarded food craze than for cupcakes, so I had to check out if this was for real. Well, it is, although thankfully it looks like it's already burning out.

I searched the NYT for "cupcakes" in the first and second six months of each year, from 1981 through the first half of 2008, and divided the number of resulting articles by the number of articles on any topic whatsoever for the entire year, to control for overall output. (For 2008, I used the number for thus far and extrapolated to the end of the year). I went with the NYT because it's easy to search, and also because the newspaper is not specifically for gourmands -- if some trend shows up in coverage even for the non-foodie plebes, it must be real.

Here is a graph of the cupcake craze: 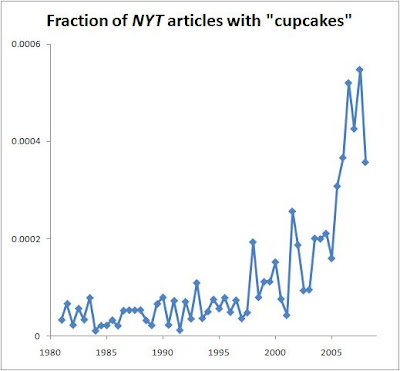 An exponential increase model accounts for 63% of the time-to-time variation; it's not as much as usual since there's somewhat of a cycle aside from pure increase. Usually the fall-winter time has more articles on cupcakes, probably reflecting the presence of Halloween, Thanksgiving, and Christmas then.

In any case, there's a steady, small amount of coverage up until 1998, when the upward trend begins. The peak lasts from fall-winter 2006 to fall-winter 2007. The spring-summer 2008 data-point is the lowest since fall-winter 2005, so -- at least for right now -- it may not be wise to start up that cupcake bar you've always been dreaming of owning. It's just slightly more prudent to invest in something whose shelf-life isn't obviously going to be two years or less.

Lastly, this graph only reflects how obsessed the cultural elite is with cupcakes -- sales data may or may not agree with this -- but at least among the foodies, this silly fad has passed out of fashion.