Delusion about aging, in graph form

Apparently I'm not the only smartass who thinks that 20 is the new 30. * Most people, though, are warmingly deluded about aging -- imagine the size of the deprogrammer army you'd need to stamp out the "40 is the new 20" cult. But at what age are people the most clueless? Let's see: 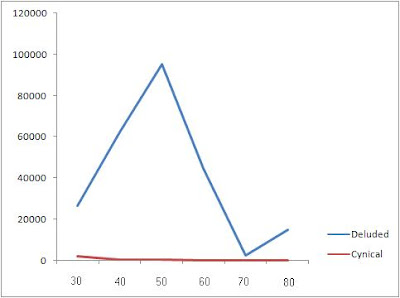 No matter what age they're talking about, people are always more deluded than cynical -- no surprise there. It's pretty bad as people approach 30, and gets steadily worse up to the peak at 50. After that, reality becomes undeniable, so awareness increases. Although with all these goddamned Baby Boomers around, the peak of delusion may simply track their mean age. (Too bad we don't have Google results from 20 years ago for comparison, although some other data source might.) At any rate, after a gloomy trend during the 60s and 70s, there is an uptick for the "80 is the new ___" group -- I suppose if I make it through my 70s alive, I'll be pretty optimistic too.

* If you don't believe me, look at this semi-NSFW photo (no full / partial nudity) that I found via a Google image search for "jailbait." The host site claims to lift them from other websites where teenagers upload pictures publicly (MySpace, Facebook, etc.). When was the last time you saw a female in her mid-20s or older who had skin that supple? And luminescent! -- the light bounces off her flesh as though reflecting off a ready-to-burst tomato. I'm sure the same is true for males, but fortunately our worth isn't affected by how taut our skin is (I avoid the sun just to be on the safe side, though).