Where are girls most likely to dig older guys?

Also, because I only looked at averages, we expect them to not be "10 years older" no matter what the sample's age, because the average female probably prefers between 3 to 5 years. We are looking for girls in the far-right tail, the ones who are fine with a much older guy. Buss' data do contain standard deviations, but I trust these less than the averages since it's harder to accurately measure a variance than an average, and I don't know how normal each sample's data is. So we'll have to operate on the assumption that where the average is higher, "extreme" values become less extreme, like finding a 6'10 man among 1 million Dutch guys than among 1 million Vietnamese guys. Small differences in the mean have huge effects in the tails of a distribution.

Moreover, how does she know what her ideal guy is? -- girls surely to underestimate rather than overestimate the age of their ideal guy. She says 5 years older, but in reality she'd be fine with 10, at least if the guy made up for being "too much" older in some way, which I assume anyone who undertakes such a project does. The unreliability of the girls' estimates does not matter when we rank the countries -- all girls provide unreliable estimates, but it's doubtful that some countries are systematically more clueless than others.

The samples are not all probability samples -- some are pretty representative, and some are convenience samples (read the PDF). Buss explicitly says that they are not meant to tell us about the individual countries, but only to get a large sample of humanity to study universal preferences. Lacking better preference data, though, we work with what we have. Small samples suggest college students, but that's who you're after anyway, right? So representative or not, they'll do for our purposes, and we'll put more faith in the data from larger samples.

We're looking for a country high on the list with a large N, although again even moderate sample sizes give us a good feel for what college students are up for. Surprisingly, the first choice is Taiwan. If you like Asian girls, that's where you should go, especially since it's a first-world sample. Brazil is up next, and those girls have enough good PR already that I don't need to add to it. Bulgaria also looks like a good bet -- see my post on Balkan babes if you don't know how great they look, kind of Slavic and Mediterranean (if you know what I mean). Israeli Jews, Poles, and Japanese seem OK. Estonia is misleading because the average girl is barely over 18 and prefers a guy who's less than 3 years older than she is, not good.

While still being cautious about the smaller samples, Greece, Colombia, South African Whites, and the former Yugoslavia also look pretty good. I think we can be fairly confident about Greece and Yugoslavia since Bulgaria and Israeli Jews had large samples and scored highly, so there's probably an "Eastern Mediterranean" pattern here. Ditto for Colombia, based on similarity to Brazil: South Americans who are mostly Mediterranean but with a fair amount of African admixture.

If I had to bet, I'd say Greece is the optimal place. Not only do they score the highest, but their sample is so young -- barely legal, as we say. The average girl in this sample is 18 and claims to want a guy who is 23, and tacking on a couple years for people's lack of intuitive precision, I think you could say 25. And this is just the average girl -- you might have to search 100 or even 1000 Greek girls, but it wouldn't be that hard to find an 18 year-old who wanted a 30 year-old, to sleep with, to marry, whatever. I can't recall where I read it, but I distinctly remember some online forum on this topic where a world traveler said that Greek girls were among the most willing to associate with older guys.

And aside from Greece's climate, history, culture, bla bla bla that you really care about, it's also a first-world country and member of the EU, so the girls can easily afford to wax or laser-remove their body hair (hey, no ethnic group is perfect). I've never been there, but judging from the Greek international students I saw at college (somewhere between 20 to 40 of them), they're pretty nice, and they along with the Turkish girls had a reputation for it. The only other group reknowned for their looks were, of course, the Brazilians. It will not escape the reader's notice that where girls dig older guys, the girls have big butts. Somehow it all works.

Another thing to bear in mind is the country's population size: if you're looking for a 1 in a million girl, she'll be easier to find in Brazil than Bulgaria.

Look at how bad things are at the lower end of the table: sure, it's only a moderate sample size, but the average French Canadian girl is 25 and claims to want a guys who's 27, and Finland's pretty bad too. You'd think that as girls got older, they'd want increasingly older guys, but it looks like just the opposite happens on a group level. Here is a graph of the country's preferred age difference by how old the average female is: 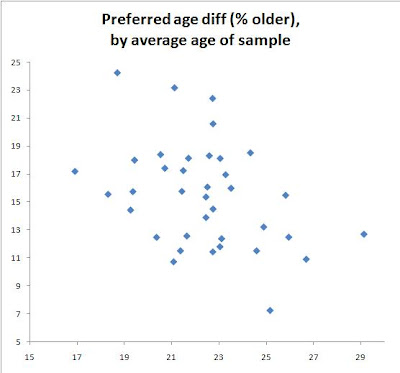 Disgusting. The older the sample is, the closer they want the guy to be relative to themselves. On the other hand, thank god for those adventuresome youngsters! The Pearson correlation between these two variables, each point weighted by sample size, is -0.32 (p two-tailed = 0.0552). I tested two hypotheses, so this is more of a "trend" than a "significant" finding, but it depends on how religious you are about p-value cut-offs. We've already hinted at it, but let's take a look at preferred age difference by GDP: 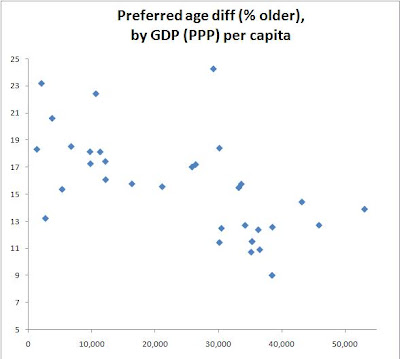 Sure enough, in richer countries, females prefer males who are closer to themselves in age. This is part of the spread of middle class values, culturally and genetically, that began with the emergence of merchant classes during the Late Middle Ages and really took over during the Industrial Revolution. Some middle class values are fine, but I can't stand how segregated these societies are by age, and seeing lovely nubile girls holding hands with losers their own age is just part of it. (Another aspect is that adults are completely clueless about what's going on with youngsters and rely on rumor as their news source.) The weighted Pearson correlation here is -0.63 (p two-tailed = 0.0001), so it's strong and significant. Still, there are some points that are above the trend: Greece is the strongest outlier above and French Canada the strongest outlier below, confirming what we've already said about their suitability.

Worry-warts may say that this shows that girls in poorer countries "really" want guys their own age, but alter their preferences toward even older guys for increased security. Maybe, and maybe there's another explanation. In any event, you're meeting her preference and therefore making her happy if you're an older guy. Why she likes you doesn't matter, as long as she does. Indeed, that's their response to my disgust at the 18 year-old who's dating a 19 year-old -- it's what she wants. The worriers will counter that a small age difference is what the girl "really" wants. But she wants whatever she wants. It certainly isn't the "deep down preference" in the sense of what's been true during human history and evolution -- the alarmists' wishes characterize the developed world.

So there you have it. Again, the data aren't perfect, but let me know if you've got something better. This is just a guide, so you can't sue me if your efforts based on it don't pan out.