Stuff White People Like: Bars that are not bars

[In imitation of C. Lander]

All white people need to refresh themselves after a vigorous game of adult kickball, though the choice of bar is not so clear-cut as you might think. Because there are too many bars that cater to the wrong kind of white people, savvy owners had to unambiguously signal their bar's status as a haven to the right kind of white people. And thus was born the creative uniqueness bar.

Simply adding "wine" or "martini" before "bar" reassures white people that they can safely discuss Michel Gondry there, and that the bartenders who they can make an awkward pass at will be girls with bangs.

Still, white people crave complicated fusion, and a bar that serves alcohol just won't satisfy this desire. No, they can only get their fix at the local juice bar, coffee bar, tea bar, or smoothie bar. Also acceptable if the white person is hungry are the falafel bar or perhaps the cupcake bar for dessert. Only if your indie cred is unassailable should you ironically suggest hanging out at a sports bar. 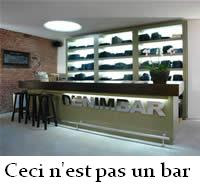 Does white people's love affair with non-bars take place beyond the realm of food and drink? Of course -- that just makes it exponentially more pointless! For example, when their Mac laptops get sick, they swaddle them in a hemp tote bag and take them to a techie veterinarian at the Apple Store's Genius Bar. Also, because white people shun conspicuous consumption, they require a discreet yet hip way of dropping the name of their $250 jeans supplier. "Oh these? Yeah, I stopped by Denim Bar last week and had to get 'em -- my old ones began looking too new."

It remains to be seen how much further the empire of faux bars will extend, but wherever white people demand a unique and creative way to plod through their daily routine, there will be a specialty bar to brighten their faces. Indeed, white people might even be persuaded to use smelly public restrooms as long as they are re-named "toilet bars."

How can you profit from this demand? Obviously by opening a bar, but not so obvious is what to name it. You could torpedo yourself by giving it a grunge-inspired title, when indie was called for instead. Let us walk you through the fine art of branding your anti-commercial business, focusing on which sub-demographic of white people you will be serving.

Though the reference is French, the setting should remind them of the Irish pub where they got embarrassingly drunk with the other Americans and Australians during their semester abroad in Portugal.

Note: must not be staffed by European-Americans. In an authentic teahouse, white people demand to be waited on by Indians instead.

Should be located in a still-gentrifying gay neighborhood.

Get it? It's so deliciously self-referential that it will serve as a lighthouse in the urban sea, calling in lovers of all that is meta.

Although the names above may sound a bit goofy, remember that all white people love puns, especially ones whose discussion among the group will allow them to finally get some mileage out of the comp lit and film classes they took in college. Also, a certain amount of unhipness is necessary for white people to pass the time by complaining about how much cooler they are than their favorite bar, rather than by socializing or dancing. A bar that they feel is over their heads will not draw many repeat customers.