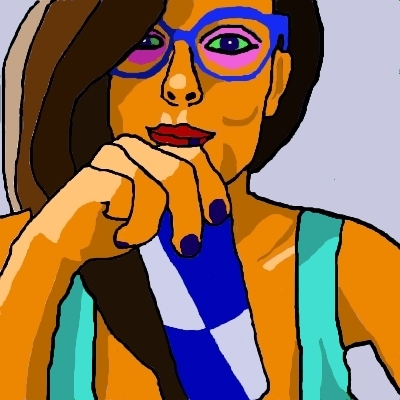 [Colors look brighter if you click the image, to view against a dark b.g.]

We value the refreshing messages of anti-woke Leftists like Aimee Terese, who refuses to commodify herself as an online brand or persona. But she has too much energy and personality to be ignored as a character in the online drama. It's simply too fun to resist, whether it's supporters making groyper avatars of her, or obsessed haters cosplaying as her for Halloween.

She shies away from sharing the personal, having more of a virtual presence. Photorealism would be odd for capturing an e-princess. So, something stylized to computer-world, but not cold and geometric -- bouncy and jocular, to match her mood. Primitive tech keeps the tone lighthearted -- just a mouse tracing over and filling in color on top of her avatar.

I gave the lips a smirk and the eyes a bit more of a smiling-squint. She is such a tease and an instigator. The palette plays up her sensual nature, a key part of the persona -- she's one of the few political women who isn't a dour, dead-inside feminazi.