One of the most bizarre reminders that we have entered a similar cultural phase as the early 2000s is the revival, seemingly out of nowhere, of really long boxy sweater jackets on girls. I can't find any contemporaneous pictures, but they do reliably make lists of early 2000s fashion items.

I distinctly remember seeing them in college. Was it a bath-robe? Trying to imitate granny's duster? Whatever it was, why are you wearing that outside of your dorm room? It just seemed so unnatural for young babes to be dressed up like old maids.

Fast-forward 15 years, and here is just one of many in Forever 21's sweater section: 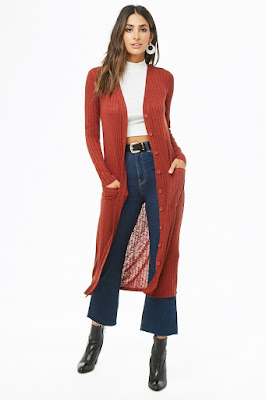 The rest of their sweaters are a lot more billowy, boxy, bulky, and balloony than just five years ago, when slim-fitting was the norm.

And it's not just what they're wearing on top -- pant legs have not flared out this wide since the heyday of the boot-cut, velour trackpants, and JNCO jeans during the first half of the 2000s.

Since the late 2010s, several articles such as this one have taken note of the revival of looks from the early 2000s. And while some may be meaningless self-aware references on the runway, the flared pant legs and oversized tops are widespread and spontaneous shifts among ordinary people.

There were similar shifts during the second half of the '80s, as the skin-tight jeans of the early '80s gave way to the looser-fitting "mom / dad jeans" (and parachute pants at the extreme), and as sweaters, jackets, and coats blew up to blimp-like proportions.

Finally, the early '70s saw the same shift -- pant legs flared far out from the slimmer "mod" look of the second half of the '60s. This was the peak era of bell-bottom jeans, but all pants were flared. Tops were not as boxy as they would become by the late '80s, but they were still more loose and flowy in the sleeves than during the '60s. Collars were also gigantic, along with big ascots on blouses -- similar to the rise of the turtleneck during the late '80s, and the slouchy cowl neck during the early 2000s and today. Something that obscures the underlying body contours.

What the late 2010s, early 2000s, late '80s, and early '70s share is their place in the 15-year cultural excitement cycle: they are the vulnerable, mellow phase after energy levels have crashed from the manic invincible phase.

During this social-cultural refractory period, no more excitement is possible, and they're over-sensitive to attempts to get them excited again. So they just want to be left alone for awhile while their energy levels have a chance to recover to normal. Normal levels are reached during the restless, warm-up phase, when they are excitable again, but have yet to take off on another manic spike. Then the cycle repeats.

It's straightforward to interpret the shift toward blanket-like clothing as one method of insulating themselves from social contact during an over-sensitive refractory phase. Apart from insulation against unwanted attention, it gives them a cozy and secure feeling that they're more likely to seek out during a period of vulnerability.

An earlier post on the decline of the No Pants Subway Ride discussed the long-term trends in exhibitionism vs. covering up as reflecting the long-term trends in violent crime rates. As crime rates soared, it brought the risk of rape into the front of women's minds, and they responded by covering up and obscuring their figure, so as to not draw unwanted attention in the first place. That was evident by the early '70s, and reached its peak during the late '80s and early '90s. And it happened as well during the Jazz Age, with its boxy shapes, during another wave of rising crime rates.

It's only during falling-crime periods when women start to worry less and less about rape, and feel less worried about going out in public with their shape easily visible to all. We've seen that not only since the second half of the '90s through the recent trend of "leggings as pants," but also during the Midcentury, whose iconic woman is the "sweater girl" wearing a tight-fitting "bullet bra" that left nothing to the imagination.

Here, then, we see a case where the manic phase of the cultural excitement cycle does not resemble the outgoing / rising-crime phase of the crime-and-cocooning cycle. Manic, invincible-feeling people are exhibitionistic, whereas rising crime rates make people feel vulnerable and want to cover up in everyday settings.

Typically, the manic phase and the rising-crime phase resemble each other, since it is outgoing-ness that leads to rising crime rates, as potential predators find more targets when more people are out and about, and when people are trusting and letting their guard down during a fun-loving zeitgeist. Manic energy levels and extraversion are similar, but not identical, and the case of covered-up vs. baring-all reveals their separation.