From a post by Zero Hedge, a handy reminder by Goldman Sachs, who are interested in the reality rather than just the theatrics behind trade policy announcements, that so far the trade war does not exist. Compare the proposed tariffs (in gray) vs. implemented tariffs (in red) from their chart: 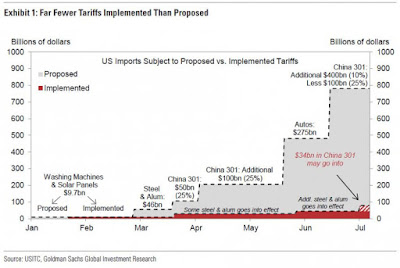 That was as of mid-June, and on July 6, the tariffs on $34 billion of Chinese imports at a 25% rate did go into effect. That means the spot with red slashes is now fully colored in, at the bottom-right corner of the chart.

Within the total level of proposed tariffs, about 10% is reality and 90% is BS (roughly $800 billion proposed vs. roughly $80 implemented). And that composition has shifted far more toward BS since late March / April, when the reality was more like 20-30% of the total (eye-balling their chart).

So the whole narrative about the "trade war" is fake news. Yet both the Trumpers and anti-Trumpers are pretending it is real. Why?

Trumpers want to claim that he is fulfilling campaign promises, looking out for the American worker instead of only the rich, and in general taking on the Establishment orthodoxy.

Anti-Trumpers want to claim that he is destabilizing the status quo, which had been glorious until he got elected, so that his unorthodox policies will harm rather than help the American worker and American industry.

Since the trade war doesn't exist, there is no tangible benefit to American workers who might have seen their factories return as a result of a real trade war. That real war would target American corporations who have closed down their American factories and sent them to cheap labor colonies instead, for lazy employers to earn higher profits for free. That is what Trump promised over and over again -- a big fat 35% tariff on "every car, truck, and part" that came across the US-Mexican border, to change Ford's behavior of closing down plants in America and moving them to Mexico.

Without any tangible benefits or harms so far, what is the upside vs. downside for both sides in the narrative battle? That depends on the near-term performance of the US and/or global economy. If things were only going to get better, Trumpers would attribute that success in part to waging the trade war, while if things only go downhill from here during Trump's term, the anti-Trumpers will blame the downturn in part on the trade war.

We are at the top of the longest expansion we've seen, more or less ever. The Tech Bubble 2.0 is going to pop during Trump's term, and it will not matter whether that's at the end of this year, early 2019, mid-2019, late 2019, or early 2020. The whole house of cards is going to come crashing down, as central banks raise interest rates and debt becomes too expensive to service, triggering defaults and bankruptcies; and as central banks start to shed rather than take on more assets like government bonds, so that they will no longer be the asset price-supporter of last resort.

Worse than the usual recession, we are seeing stagnant growth with rising inflation -- stagflation -- indicating not just the end of a single business cycle, but of an entire cycle of cycles, or cohesive period in economic history. The stagflation of the late '70s signaled the end of the New Deal period (in all countries, not just the US, and in communist as well as capitalist economies). With today's stagflation, we are now nearing the end of the neoliberal period.

That's going to be one hell of a collapse. And with it, the anti-Trumpers will cry "I told ya so" about the non-existent trade war. They want to preserve the cultural sanctity of free market fundamentalism -- as well as its material reality for the elites. So in their telling, it will not be neoliberalism that killed neoliberalism, but rather the most wonderful economy in world history, which Reagan began and which Obama was the last to preside faithfully and respectfully over, was brought crashing down by Trump's disrespect for the global order and his desecration of free trade.

And that's where the anti-Trumpers' reach will exceed their grasp. Their narrative will rely on the economy before Trump's non-existent trade war having been the greatest we've ever known, the pinnacle of human civilization, tracing a long glorious path back to Reagan. But by now, the populist genie has been let out of the bottle, and most Americans not only don't believe that story, they believe the opposite is true, and they're mad as hell that no one among the elites seems to be doing anything to steer us back toward our golden age of the mid-20th century.

Of course, the kneejerk Trumpers will have no leg to stand on either. They claimed the trade war was real -- well, if it had been truly going on, and the result was a total collapse, then trade wars are bad, and the person and the whole movement that supported them are discredited, and they are disqualified from leading the way out of the collapse.

That's the opening for the Bernie revolution -- like the Trumpers, they've been saying how rotten the system has been for a long time, particularly on trade and de-industrialization. But unlike the Trumpers, they didn't just jump on some bandwagon and ride it wherever it went -- even if it meant hyping up a non-existent trade war, to protect Dear Leader's reputation and to score theatrical-only points rather than deliver tangible benefits. The Sandernistas will not be the target of blame, since they had no part in either waging the non-existent trade war itself, or in hyping it up through the media.

Their message will be that they are not merely using populist rhetoric to defend American corporate interests -- the only real goal of the Trump admin's trade policies (e.g., protecting intellectual property, in which the working class has no stake, but white-collar IT professionals and stockholders do). They are not beholden to the Chamber of Commerce and National Association of Manufacturers, so they will make good on Trump's 2016 campaign rhetoric that failed to materialize, since the GOP is controlled by the very interests that Trump sought to upset. The Bernie people will target Ford, Carrier, Nabisco, and the rest of them, rather than just lashing out at China or Mexico, who are only the recipients of stolen goods rather than the American corporate thieves themselves.

The Bernie revolution will focus on punishing American corporations for their anti-labor policies back to Reagan, including the off-shoring of manufacturing plants, and re-regulating them until those plants come back here, including real, not proposed, tariffs that hurt the off-shorers. That will provide a genuine economic recovery, since manufacturing is real productive activity, not just some speculative bubble funded by central banks so that rich people can jerk each other off with free money, "investing" in each other's airhead vanity projects instead of hiring the bottom 90% to do real work at prosperous wages (indirectly stimulating demand).

There is thus no future in either defending neoliberalism or Trump's reliance on theatrics (after getting cockblocked by his party's economic sectors). The only thing to figure out for populists is where you're going to fit into the emerging Bernie bloc of politics, and how you can negotiate with its other members. In the meantime, call out how phony the dead-enders are on both sides, and why there needs to be a complete overhaul rather than just serving as cheerleaders for either faction of dead-enders.