The wave of retirements by Republican members of Congress contradicts the hopeful narrative among Trump supporters that he is re-aligning the party in his own image, as well as the hysterical Resistard narrative that the GOP has abandoned its former respectability and fallen in line behind the party's new authoritarian leader.

Both narratives assume that Trump is pulling the party together like never before, solidifying its cohesion, and strengthening its resolve to go do battle as a united front.

If that were true, nobody on the team would even dream of jumping ship right as they're about to launch an invincible assault on the enemy, throwing away so much glory.

And yet we see historically unprecedented numbers retiring -- not defecting to the other team, but quitting political battle altogether.

And they are not marginal members of the team, but include many committee chairmen. Nor are they from the powerless fringes of the party, but from its supposed governing center -- hailing from the Tuesday Group rather than the Freedom Caucus or the Tea Party. Nor are they freshmen who quickly discovered they bit off more than they can chew, but long-serving members with accumulated political capital that they are prepared to deprive the party of.

These are the ones who Trump was supposed to win over and make "bend the knee" to the populist-nationalist re-alignment of the GOP. They had the connections, the favors owed, the know-how of the ins and outs of governing, and he was supposed to harness their power but apply it in a whole new direction.

Rather than submitting to his hostile takeover of their coalition, they are committing mass suicide instead. "Let's see him wield control over a party with no one left in it!" (At least, no one left who can make things happen inside Washington.)

A self-congratulatory narrative from the Dems has it that these Republicans sense the coming wave of blue victories in the mid-term elections, and are getting safely out of the way early.

But that did not happen during the last mid-term when Republicans held control of the White House and both chambers of Congress, and faced increasing hostility toward their agenda, which under this theory should have sent them heading for the exits. That was 2006, when just 9 Republicans and 6 Democrats retired, yet Democrats netted 30 seats in the House and took it back.

Nor did it happen the last time the Democrats controlled all three elected bodies and were facing a tidal wave of opposition in the mid-terms. That was 2010, when both parties were evenly matched and not so high in their retirements, with 14 D's and 13 R's retiring, yet the Republicans netted a whopping 63 seats in the House to take it back under the Tea Party.

See the chart at the end of the post for the history of Congressional retirements and outcomes of Congressional elections, since 1974, from this post at FiveThirtyEight. (That was made back in September, and does not include the large number of retirement announcements for 2018 since then.)

If it is not foreseeing a coming rout and wanting to avoid the bloodbath, what is it about?

The only other times similar to this mid-term year, from the chart of 1974 to present, are 1994 and 1978. Those saw high retirement numbers, which were lop-sided toward one party. Strangely enough, the retiring party held control over the WH, House, and Senate. In both cases, there were decent gains for the rival party in the mid-term elections -- enough to flip control of both houses of Congress after the '94 Gingrich wave, although not enough to flip control of either during the milder '78 wave.

The '18 mid-terms feel like a milder wave than a tsunami, so the situation is likely closer to '78 than '94.

In both of the previous cases, it was the Democrats who broke down. They were not much of a powerful force after their most recent heyday of the New Deal and Great Society period. That suggests that it is now the Republicans' turn to break down after their Reaganite heyday.

Someone would have to track down who belonged to the mass suicide of Congressional Democrats in '78, but I'll bet that they were from the more established yet long-in-the-tooth lineage of FDR and JFK, who were refusing to surrender to the would-be re-aligner Carter's vision of deregulation and shrinking the welfare state.

Some of them, of course, did not retire -- like Ted Kennedy, who tried to hold the old-way line and gave a bruising primary challenge to the sitting new-way president. That primary hobbled Carter in his general election fight against Reagan, who campaigned on out-Cartering Carter.

That would place the current wave of retirements within the broader pattern of evidence that Trump is the Jimmy Carter of the Reagan coalition, at once struggling to hold it together while re-aligning it in an entirely new direction. That would mean that, notwithstanding all of the Republicans who are offing themselves rather than be taken hostage, some will remain who will try to wound the sitting invader president in the next primary. Mitt Romney is not suddenly heading off to the Senate in order to help Trump carry out the re-alignment.

Looking forward, this means that there will be a leader from the rival party who will campaign on out-Trumping Trump on populism and economic nationalism -- Bernie Sanders. The other Reaganite-in-disguise Democrats will be in no more demand than the New Deal-friendly Republicans were during the Reagan revolution.

As mass numbers of Republicans evacuate the Congress this year and in the 2020s, they will be replaced not by populist Republicans -- of whom there are none in existence other than the president himself -- but by Bernie-style Democrats who are more natural embodiments of the economic nationalist zeitgeist.

History of retirements and electoral outcomes: 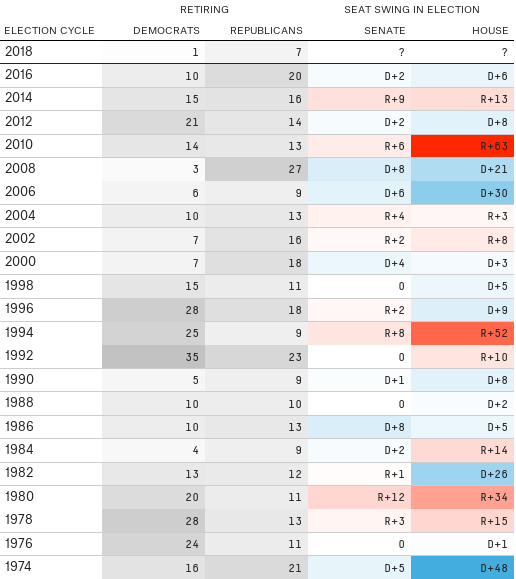