When must-have toys were Made in USA, and built to last

Another Christmas, another Star Wars movie, another attempt to cash in on the hype with toy lines just as the little kiddies are drawing up their lists for Santa Claus.

By churning out new Star Wars movies every year, they are making them less unique and distinct as cultural events. And the same goes for these toy lines. Kids won't get excited about them, as they become habituated to them, and will not have other novel toy lines to turn to, since everything is about Star Wars now.

Back when Star Wars first came out, it was a self-contained phenomenon rather than a continually practiced religion -- it was not going to be re-enacted from now until the end of the universe. It made the toys a phenomenon in themselves, rather than the same old predictable crap from last year but slightly updated. You had to get in on the Star Wars toy craze, because it would not last forever, and next year or the year after that, it would be something else.

If you Google Image Search "Christmas 1983," a majority of the results show Star Wars toys. When my family gets together for Christmas, we sometimes watch old home movies, and there's one from Christmas '83 where I'm so entranced by the Star Wars toys that I don't show much appreciation for the other gifts under the tree. It was the thing to get.

A lot of those toys literally still hold up today, since they were made before manufacturing standards went down the tubes as American companies started off-shoring these jobs to places where labor is cheap and doesn't give a shit about quality results.

They were not made to high standards because they believed Star Wars would become an enduring brand, and that the merchandise needed to be collectible in quality to last as long as the brand's appeal lasted. They simply didn't want to sell their customers a bunch of cheap junk at high prices.

Not everything from the heyday of children's toys during the 1980s was made in USA, though. No matter which brand, the ubiquitous action figures were mostly made outside the country (Mexico, China, Taiwan, and Hong Kong). These toys do not require much assembly, and the process of pouring plastic into the molds for the arms, legs, torsos, and heads can be overseen by careless Chinese or Mexican laborers.

The 1980s did see the beginning of the off-shoring of manufacturing, but it began with cheaper things that customers might not care about so much being made in China. Such as action figures, compared to other kinds of toys.

The vehicles and playsets, however, were still being made right here in America. Things that require a decent level of assembly -- putting a bunch of heterogeneous components into a single finished whole product -- were too much to be trusted to Chinese sweatshop labor back then. You needed more attentive and well-paid American workers to put complicated things together.

It's the same reason that major devices were still being made here, like automobiles, washing machines, and television sets, while less complicated products were undergoing rapid off-shoring, like textiles and clothing.

Even if the parent had to put the pieces together for their kid's toy ("some assembly required"), the quality of the components was too high to be done overseas. The plastic used for action figures does feel cheaper and more rubbery, but the stuff used for vehicles and playsets is more durable and has finer details. Anything that required precision had to be done here.

The three major toy makers were Mattel, with factories in southern California, who made He-Man and Secret Wars; Hasbro, manufacturing out of Rhode Island, who made G.I. Joe; and Kenner, whose main factory was in Cincinnati, Ohio, who made Star Wars. Other companies who made toys here in America include Coleco, Tyco, Remco, and Tonka.

When they closed up most of their factories is hard to determine, but from old news articles it seems like the late 1980s through the early 2000s saw the sustained shuttering of American toy-making plants. The companies and brands still exist in America, just not the actual production that sustained working and middle-class families and their communities.

Once American companies had off-shored the cheaper products, they began off-shoring the more complicated ones as well. No washing machines or televisions are made here anymore, and it's lucky that cars and airplanes are so complicated to make -- they're one of the few things we still feel are too complex to trust to cheap foreigners.

So it goes with toys, as the vehicles and playsets have joined the action figures in all being made in cheap-labor countries, with cheap materials, and shoddy assembly. No one thinks that today's Star Wars toys are going to physically endure as long as the ones made 35 to 40 years ago.

And yet mergers and acquisitions, together with off-shoring production, have made these companies more profitable than during their heyday as makers of cultural phenomena (no one cares about new Star Wars toys).

They should not be rewarded with skyrocketing profits after destroying their American workforces and offering customers more and more forgettable products of lower and lower quality. Time for those 35% tariffs on off-shored production, maybe combined with some direct federal subsidies for American toy manufacturing.

While sociopathic corporations deserve nothing more than a load of coal in their stocking, let's not end on such a "Bah humbug" note, and let memories of the not-so-distant past remind us that a better world is possible. If we were doing better then, we can do it again in the future -- it's not a hypothetical experiment.

Working and middle-class kids got to enjoy quality-made toys, and the still largely manufacturing oriented economy allowed the toys' assembly-line workers to earn enough to give nice things to their own children for Christmas. 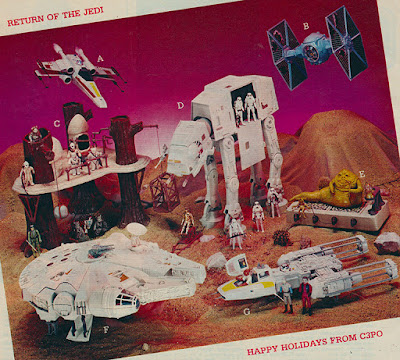 I was lucky enough to own an AT-AT as a kid. It seemed so much more real because of how well put-together it was -- not just some cheap little "toy". Although scaled down, it seemed like a real vehicle that had rolled off of a real assembly line at a real factory.

I still have a few old Star Wars toys, and the motivation for this post came when I checked the country of origin on Jabba the Hutt out of curiosity. His little pet is made in Hong Kong, but I couldn't believe the dungeon / throne and Jabba himself are made in USA. 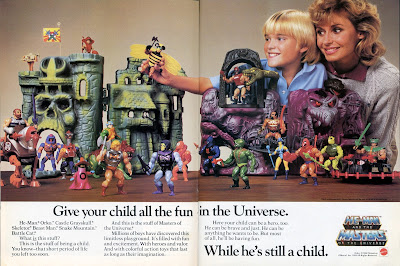 Another of those old home movies shows me playing with the Snake Mountain set from He-Man. It has a microphone and speaker with a "scary voice" effect built in (some distortion, echo, lower pitch). I didn't notice until looking at the ad just now, but the painting detail on the He-Man playsets is something you wouldn't see done today -- too much skill to use an airbrush, or whatever it was. 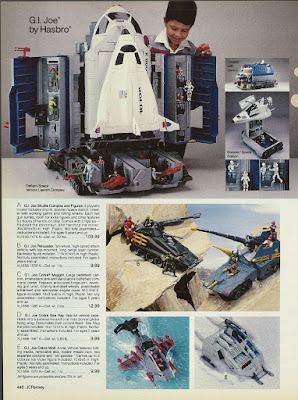 The most impressive toy I ever got was the Defiant space station from G.I. Joe. It really is as big, complicated, and slickly made as it looks in the ad. My father and uncle had to spend most of the afternoon putting it together. I couldn't ask for hardly anything else that Christmas, but I didn't mind -- it was the coolest thing I'd ever seen.

Now that the Millennials are old enough to go through nostalgia, it's notable how little they care about the toys of their childhood to the same degree that Gen X-ers remember their toys from the '80s. Much of that must have to do with how fast the quality level dropped off during the '90s. There was no American-made Ewok Village, Snake Mountain, or Defiant space station to captivate them. Just cheaply made disposable crap from China.

Once we restore manufacturing to the American economy, kids will appreciate the things of their childhoods again.