The Blade Runner sequel may not live up to the visuals of the original from 1982, but that's not because they didn't try. The original was one of the first to establish the visual code for dystopian environments that remains to this day -- dark, bleak, and socially fractured.

Original director Ridley Scott laid the foundations for this aesthetic a few years earlier in Alien, although that movie did not rely on a fragmented social atmosphere; all the characters knew and trusted one another, and were part of an organized team.

Mad Max, also from a few years earlier, had the bleak and fractured atmosphere, but not dark.

It was Escape From New York and Blade Runner in the early '80s that really cemented the contemporary look-and-feel of dystopian environments. That continued through The Terminator, RoboCop, Total Recall, right up to today's re-boots and sequels like Tron: Legacy and Blade Runner 2049.

What did dystopia look like before Alien and Blade Runner? Bright rather than dark, lush vibrant and life-supporting rather than barren decaying and life-sapping, and suffering from an excess of social harmony rather than an excess of everyone looking out for Number One.

Here is a whirlwind tour through dystopian environments circa the 1970s: 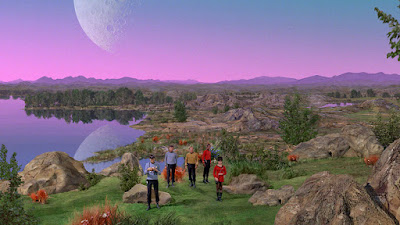 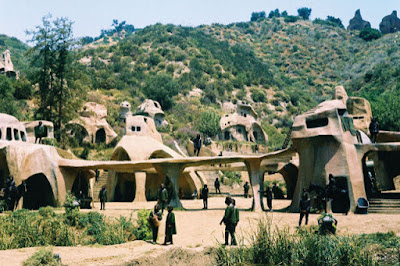 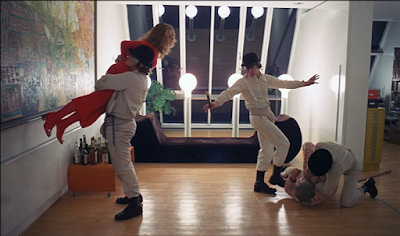 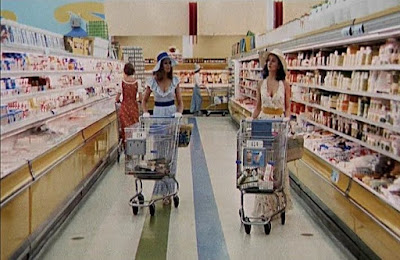 The brightness is self-evident, and so is the lush and thriving state of nature -- or if it takes place in an urban setting, the clean orderly and well-maintained structures as opposed to more contemporary urban scenes of filthy crumbling ruins.

You might object that the social atmosphere was still atomized back then -- it would seem to contradict the premise of it being a dystopia if everyone got along happily. But it was the source of atomization that differed -- back then, the creators of these scenes pushed the idea that individuals lost their authentic connections to one another by mindlessly following the herd, going through social rituals whether each individual wanted to or not, and in general having social harmony enforced and regulated by some higher council rather than organically emerging from relations that were freely entered into by the individuals concerned.

In short, they were the libertarians' view of dystopia, where some council had gone too far in enforcing social harmony. Pushing these scenes as nightmarish came right as Western societies were moving out of the Great Compression, where the mindset was reining in your individual ambitions in order to maximize harmony, and into the New Gilded Age, where the mindset is letting individuals do whatever they want, whether or not that destabilized the larger groups that these egocentrists belong to.

The Seventies was the time of the Me Generation -- the Silents and the emerging Boomers who had grown up under Midcentury conformity, taken social harmony for granted, and begun to "liberate" their individual desires in ways that would break down social bonds and societal cohesion. The dystopias from the tail end of the Great Compression reflect that bristling at a moral order that they viewed as "conformity uber alles".

It did not take very long to see where this re-birth of the laissez-faire moral order would lead to -- a new Gilded Age, a new inequality, and a new ethos of Social Darwinism to rationalize the new material conditions.

If everyone is looking out for Number One, group-level structures will crumble as public goods are no longer paid for or maintained, and individuals will become isolated from one another due to the "use or be used" morality. As stewardship vanishes, so will environmental conservation and maintenance -- there goes all that lush and vibrant greenery.

The darkness not only suggests the hopelessness of a dog-eat-dog world, it heightens the sense of nobody is supervising what anyone is doing, as the very first step toward any degree of social regulation. If anyone gets to do anything they want, it is as if they are all acting under the cloak of night.

Contrast that with the libertarians' view of dystopia, where the overly bright spaces give an almost painful sense of being supervised under the spotlight of a council in charge of a Panopticon. You would feel more obligated to rein in your selfish tendencies if you felt you were being watched so powerfully by a group of norm-enforcers.

The sole exception that comes to mind of post-'70s dystopias is Demolition Man from 1993, which juxtaposes both sets of environments -- the bright lush overworld where councils go too far in enforcing harmony and prosperity, and the dark decaying underworld where urchins do their own thing in atomized poverty. 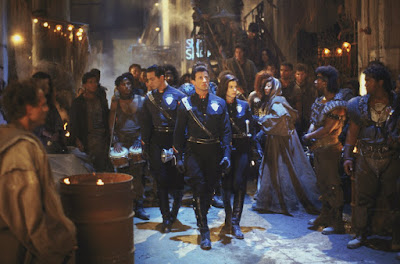 Of course the intended message from the creators was that the well-fed and bubble-wrapped dwellers of the overworld were cruelly oppressing the starving and vulnerable denizens of the underworld. But it can be just as easily understood the other way around -- that their own choice of moral framework determines the material conditions of the two worlds, not that one is imposing its will upon the other. You can either choose to rein in individual desires and be prosperous and safe, or you can choose to let people do whatever feels good and be poor and vulnerable.

Although not the intended message, this movie still shows a deeper awareness of the trade-off than the dystopias of the Seventies, where the bright lush harmonious world was uniformly loathsome and oppressive. They believed that a society could have both the prosperous and safe world of the Midcentury, while also allowing individuals to liberate their desires. They were libertarian utopians who denied the inherent trade-off between liberty and prosperity.

Later entries of Me Gen libertarianism at least admitted that the two conflicted, and that they would choose liberty over prosperity anyway. Here's the classic Dennis Leary rant from the underworld of Demolition Man, where he concedes that doing whatever you feel like at any given moment means choosing an environment where you "maybe starve to death":

Generally speaking, though, the contemporary dystopias have come not from apologists for laissez-faire but from Me Gen members who did not cast their vote for "do whatever" along with their cohorts back in the Seventies. Ridley Scott, John Carpenter, David Lynch, Paul Verhoeven.

They have more of an anti-yuppie attitude and long for a world with more order rather than more chaos, as exciting as chaos can sometimes be, because they value the group's well-being over the sum total of hedonism over all individuals. They come off more as New Deal Democrats than Reagan Republicans or Clintonian neoliberals. And whether they would admit it or not, they would agree more with the vision of how the world looks as delivered by Trump-the-candidate and Lou Dobbs than by Crooked Hillary and Rachel Maddow (being liberals, they would probably agree most with the view delivered by Bernie).

A future post will look at Surrealism, which shares a lot with the Seventies dystopias and also hailed from the Great Compression.