Part 2 of the micro-geography of diversity: Detail on density and mixture

Let's look into how the first two spatial factors of ethnic diversity affect the local civic society. The examples will come from the black-white eastern half of the country, since there is a longer history to judge from, compared to the Mexican-(black)-white western half.

Sparse is better, for whites too, but especially for blacks and Mexicans. Any social phenomenon that requires two or more people teaming up is proportional to the density of the individual members (the "law of mass action"). If there are 10 blacks in a neighborhood, who are spread out one to a block, they will have greater difficulty gathering together to play a game of basketball than if all 10 of them were packed densely into the same block. Substitute playing basketball with forming a gang, roving in packs, loitering while drunk / high, or other blessing of diversity.

Contrast Houston with Chicago. In both cities, roughly 1/3 of the population is white, black, and Mexican. However, the blacks and Mexicans are both densely packed into their territories in Chicago, vs. being thinly spread out in Houston. This shows up as the dots looking darker when clustered, and lighter when spread out. Chicago has a far worse reputation for being a ghetto mess than Houston, so sparse settlement wins.

(In all these maps, whites are red dots, blacks are blue, Hispanics are orange, Asians are green, and Others are yellow.) 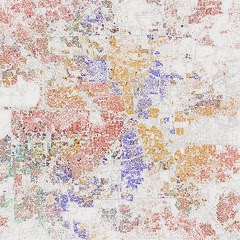 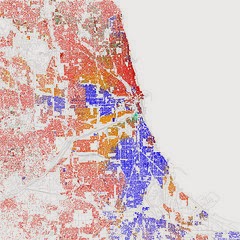 Segregated is better. This follows from Putnam's research showing that diversity erodes trust within a neighborhood.

Contrast Atlanta with Virginia Beach. In Atlanta, blacks are over 50%, but it's highly segregated, with blacks and whites only overlapping a lot in the (sparse) northwest part. Most whites are fairly insulated in the northeast part, while blacks remain mostly in the southern part. In Virginia Beach, blacks are only 20%, which on its own ought to make for a happier white population than in Atlanta. However, black and white areas are mixed to varying degrees all around the city, with no clear "our side" and "their side". 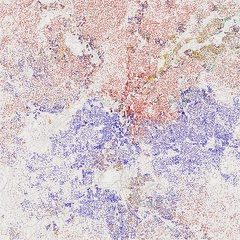 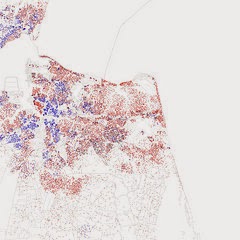 Virginia's coastal Tidewater cities in general (Richmond, Newport News, etc.) are more mixed than segregated, leaving whites nowhere to run to. Virginians (i.e., excluding DC metro transplants) are more likely to complain about black behavior than Atlantans, because they have to see it everywhere they go. White Atlantans have no illusions about the black areas being anything but ghetto / hood culture, however they're more likely to just laugh it off and get back to their happy-go-lucky segregated living. Out of sight, out of mind.

Because Putnam found that trust is eroded even among members of the same race when there are high levels of diversity, we should expect whites in Tidewater Virginia to be less engaged in civic life with their fellow whites, compared to whites in Atlanta.

One way that shows up is the lower level of religious attendance in Virginia than in Atlanta, Birmingham, and other typically segregated parts in the South. Virginia lies just outside of the Bible Belt. See the map below for rates of weekly / near weekly church attendance (from a Gallup survey in 2009). 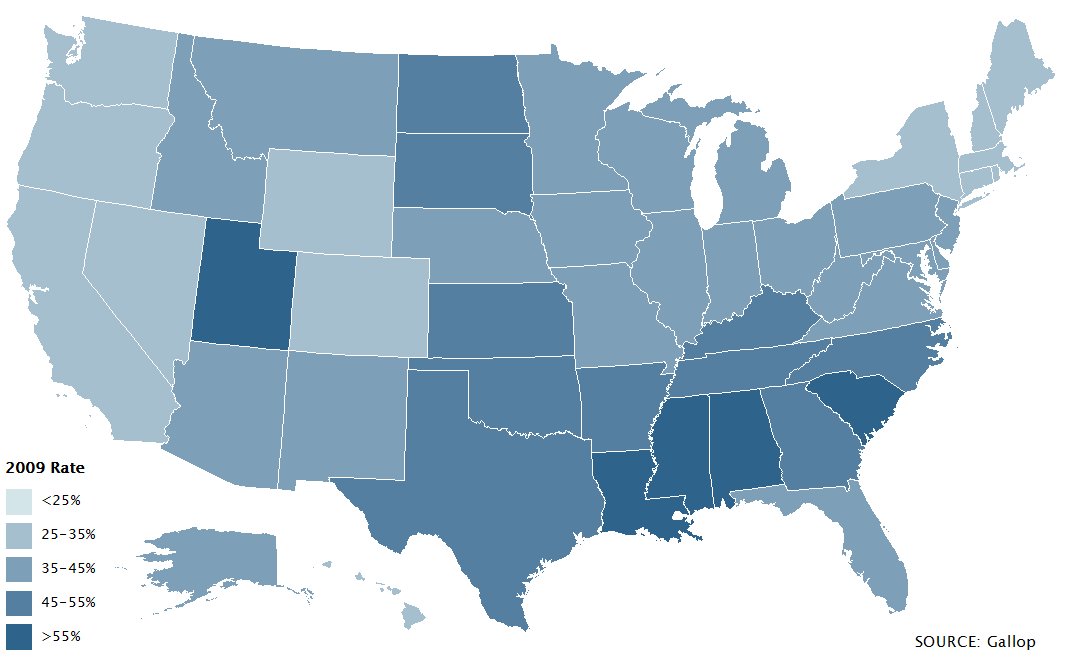 Religious attendance is not just a Southern Baptist redneck thing, since the largely Nordic and segregated population of the Dakotas and western Minnesota are frequent participants in the Lutheran Church, as are their Puritanical Yankee Mormon counterparts in Utah.

And of course blacks also attend church more frequently in the segregated Deep South compared to mixed Virginia. Promoting "separate but equal" living zones is not only good for white civic society, but also for black civic engagement, such as it is. While black civic participation may not be up to white levels in the South, it is downright abysmal farther north along the Mid-Atlantic, as well as out in the Midwest.

During the '60s, blacks in the South co-ordinated a series of non-violent protests, largely organized through churches, in which Virginia did not play much of a role. There was the Montgomery bus boycott, the Birmingham campaign (where blacks took the dousing by firehoses), the Little Rock Nine integrating Central High School, and so on. When Rosa Parks declined to give up her seat, she didn't jump up into a boxing stance, pulling hair and shouting "Worl' stah!"

In contrast, blacks in the more mixed areas of the East Coast and Midwest broke out into full riot-and-loot mode. Unlike the church-organized plans of blacks in the South, an atmosphere of anarchy and mob rule prevailed among the race rioters in the desegregated parts of the country.

As far as I know, no one has applied Putnam's "corrosive diversity" findings to failed civic institutions among blacks, let alone in the past, to show that neighborhood-level diversity is bad for them too. I haven't dug into the literature here, just stating an impression from what I (haven't) heard so far. The lessons of history teach us that it's better for all groups in a diverse society to keep apart from each other rather than overlap in territory.