Wide-open eyeglasses for a non-ironic look

Earlier I showed how different the impression is when someone wears glasses that are narrow as opposed to wide. Narrow eyes, whether now or during the cocooning Midcentury, make people look aloof and self-conscious. Wide eyes like you saw back in the '70s and '80s look inviting and other-directed.

Of course today's narrow glasses are more off-putting than the Midcentury originals because there's now a level of irony on top of it all. Get it -- retro Fifties, geek chic! Yep, we get it.

It makes you wonder whether people could ironically wear wide-eye glasses (other than sunglasses). I've been wearing a pair from several decades ago since the summer, and haven't gotten any winking approval looks like "Oh I see what you did there, Seventies glasses FTW!" They're pleasantly inconspicuous.

I was searching Google Images to try to identify the drinking glasses that my parents used to own around the time I was born, with only pictures to go from. "Vintage glasses orange brown" turned up this result: 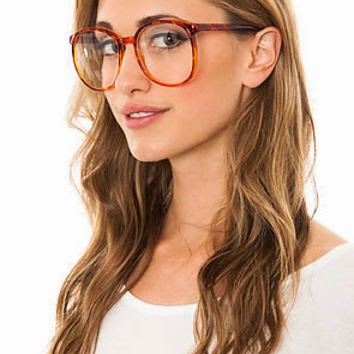 It's meant to be part of an ironic "hot for teacher" costume for Halloween, but it doesn't succeed in the ironic department. Somehow, wearing wide-eye glasses makes someone look inviting, kind, and sincere, even when they're aiming for ironic.

Contrast the effect with those "sexy nerd" glasses with narrow eyes and thick rims, where the girl just looks sassy and self-absorbed. Wearing glasses like the ones above makes her look refreshingly tuned in to other people instead of herself.