Disgust-based morality, by politics and class

I haven't gotten around to reading Jonathan Haidt's books just yet (just talks and shorter prose), so the result below may already be known and discussed. If so, at least this would replicate it using another sample.

Briefly, his work has shown that liberals and conservatives differ in how many moral "taste receptors" activate when they ponder moral questions. (I don't know if there are behavioral studies too). The moral sense of liberals gets activated mostly by the receptor for avoiding harm / caregiving, and for fairness / justice / reciprocity. Conservatives' moral sense gets activated by those two, but also by those for authority / obedience, maintaining in-group vs out-group borders, and purity / sanctity / disgust / taboo.

This is part of the ongoing culture wars, so I thought it might also look like what Andrew Gelman and others have found about class differences and participation in ideological wars. They found that lower-income people are not so divided politically when you look across the country -- a poor blue-stater and a poor red-stater are pretty close, and both fairly in favor of Democrats. However, as you move up toward the highest-income people, the divide between red-staters and blue-staters rips into a chasm. So, the rich in Texas and in Connecticut are very far apart, the former heavily Republican and the latter heavily Democrat.

It also gets at the reminder from Henrich et al (2010), "The Weirdest People in the World," that studying college-educated Americans will obscure patterns happening at the lower-class level within the West, not to mention in non-Western countries.

To examine disgust-based morality, let's look at the General Social Survey question that asks what you think about sexual relations between two adults of the same sex. Other aspects of the pro-gay movement may activate other moral receptors in conservatives, but the corporeal act of one man getting jammed up the butt by the cock of another man -- that's enough to make a conservative's skin crawl.

Responses basically fall into there's nothing wrong with it vs. it's always wrong, so I lumped them into those who said there's nothing wrong vs. there's something wrong. The red bars below show the "yuck" responses. There are many ways to operationalize class; the charts split people up by years of education -- 1 to 8 years, 9 to 12, 13 to 16, and 17 to 20. Respondents are restricted to whites to avoid racial confounds with both class and with disapproval of homos. Their age was restricted to 30+ since lower ages might not have had the chance to complete so many years of schooling.

These charts show disapproval of gay sex by political orientation, from very liberal to very conservative, separately for the four education-based class groups. 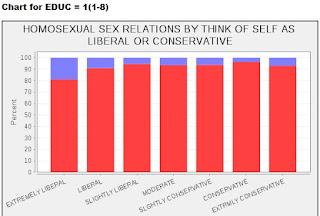 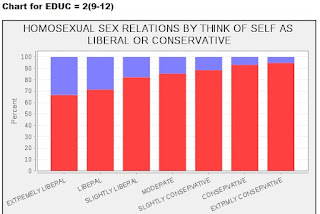 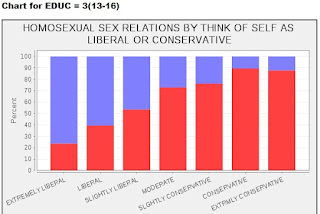 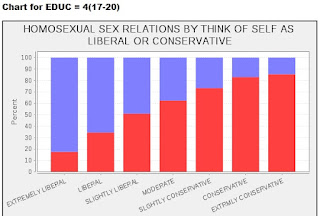 The difference in disgust-activation across the political spectrum can be seen by the slope of the line going across the tops of the red bars. It's more or less flat among the lowest class, who didn't complete any high school, from a low of about 80% within "very liberal" to a high of about 95% within "very conservative". Among those who had high school, there's a steeper slope, and there's an even steeper one among those who had some college. The steepest slope of all is among those with post-graduate schooling, going from a low of about 15% to a high of about 85%.

So, as with the red-state vs. blue-state culture war, the broader culture war seems to be a divide mostly among the middle and upper classes. Closer to the bottom, pretty much everyone is in agreement that sodomy is sick and wrong. Across the world's primitive cultures, disgust plays a decent role in morality, so lower-class Westerners and conservatives of all classes are more in touch in real life, the natural roots of mankind, etc.

That ties back to a point I recently made about conservatives being more emotionally intact and liberals more emotionally numb. Disgust is after all one of the most powerful emotions you can experience. For liberals, a homosexual half-corpse eaten up by diseases, of which HIV is only the nastiest species out of thousands, is an abstract public health problem that activates the caregiving receptor. How the body got that way is anybody's guess, I guess. The liberal disconnect from reality here stems from their blunted disgust response.

I'll try poking around the GSS to see if other moral receptors show this pattern as well. And I'll re-visit the theme of disgust and morality a few other times too.