Have you ever met someone who is heavily into the belief side to religion, but doesn't meet up with fellow believers? Indeed they may be obsessed with the intricacies of the relationships among each of their beliefs, as well as how they are similar and different from those of others within their main religion, or other religions entirely. Yet they almost tense up at the thought of regularly congregating with other adherents.

The General Social Survey asks people how often they attend religious services, as well as how strongly they identify as a ____, whatever religion they professed in a related question. I've taken only respondents who said they are a "strong" _____, and also kept them just to whites. Here's the change over time in the percent of them who attend religious services nearly every week, once a week, or more than once a week: 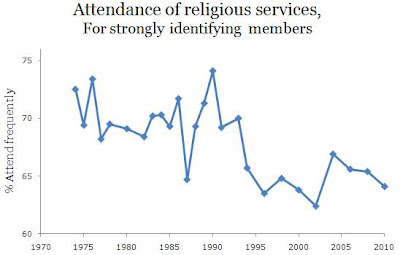 There's no visible trend from the 1970s through the '80s and even the early '90s. Starting in 1994, though, frequent attendance among strong believers starts to fall off. It got a shot in the arm in 2004, but quickly returned to the downward trend. The peak year was 1990, and the low point 2002, with 74% vs. 62% attending frequently. The general pattern is lower attendance in falling-crime times, with the mid-2000s blip being a response to 9/11, part of that general quasi-wave of patriotism, that has petered out since at least 2006 or '07. It's only a matter of years before it returns to the nadir of 2002, now that the effects of 9/11 have almost entirely worn off.

So clearly there's a good size of strong believers who have steadily dropped out of the community of their religion. I don't buy the view that this group is just perfectionists, that from some personality defect they just couldn't stand to be around others whose views are not exactly identical to their own. Nobody's that perfectionistic.

Rather, it is yet another facet of the cocooning trend. You might think that church attendance, etc., is down overall because the population is becoming more secular, less attached to religion. However, I'm talking about those who continue to strongly identify as whatever label they wear. Even those who are the opposite of secular have driven themselves indoors all day long, day after day, and if that means the gradual disintegration of their religious community, well so be it.

The ritual domain of life has gone up in a puff of smoke, with costly group-bonding activities being replaced by beliefs that are cheaply held in private. A lot of the changes I've covered over the past two and a half years seem to fall under "the decline of ritual," so that might deserve a cataloging and clarifying post of its own.