Starting around 1992, young Americans began killing off the sexual revolution that reigned during the '60s through the '80s -- by waiting much longer to get started, having fewer partners, using condoms more often, and so on. These are just a few of the starkest examples of how sexual wildness tracks the level of violence in society, the logic of which I explained some posts below.

Earlier we saw that reports from lit fic observers that interest in sex shriveled up among the novels of the superstars of the 1990s and 2000s, especially compared to the blockbuster writers of the '60s through the '80s, for whom no amount of sex was gratuitous. An even better place to look for the cultural reflection of the birth and death of sexual liberation is movies. They have to appeal to a much broader audience, there are a lot fewer of them than books and hence easier to study close to the whole universe of "popular movies," and busybody parents have already put together a wealth of information about whether a movie shows skin or not.

To quantify this, I took the top 10 movies at the box office for a year -- that's surely a good measure of the movie's resonance with what audiences wanted. I then checked the "parental advisory" section of their entry at imdb.com (or in a few cases where the movie was more obscure, at other "protect the kids" online resources for parents). If there was at least one scene of partial nudity -- even an exposed nipple -- that lasted longer than a moment, I counted it as having nudity; otherwise, not. So this isn't a measure of really raunchy stuff. Because it's such an easy threshold to clear, if hardly any movies in some year fail to meet it, then we are very safe in categorizing that year as a prudish one.

The first full year that nudity in movies was allowed was 1969, after an earlier ban was reversed in 1968. The ban, also known as the Hays Code, was only enforced starting in 1934 -- the very first year of falling crime that would last through the '50s, after the earlier surge of crime from at least 1900 through the Roaring Twenties and the early '30s. As an aside, a probably something I'll flesh out more later, these bans typically only occur when they are not needed -- when the people are themselves already becoming tamer. They are expressive of the more prudish zeitgeist, not an attempt to deal with a real problem.

Here is the change over time: 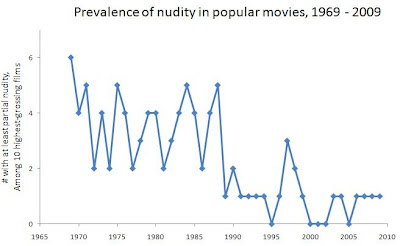 Similarly, once the sexual counter-revolution began in the early-mid 1990s, nudity vanished from all of those domains. We can't use the internet in this comparison over time because it did not exist during rising-crime times. But can you imagine what people would have uploaded to YouTube in 1977? Or what percent of all internet traffic would have been for porn in 1984? If you think kids today post sexualized photos on social networks, you can guess what it would have looked like if people at Studio 54 or Danceteria had had Facebook or Flickr to show their friends what they were up to last weekend (or what they saw at any rate). I've earlier noted the death of streaking during the falling-crime times. They captured more images of streakers in the '70s and '80s without the benefit of more modern technology because people were actually streaking back then, and have not since.

It's harder to get a feel for, but I think even adolescent guys' bedrooms aren't saturated with nudity like they used to be. I'm just thinking of every YouTube video I've ever watched that was shot in someone's bedroom, and I don't ever recall seeing one where there was a poster of a girl showing her boobs, let alone posing nude. But rewind to Jeff Spicoli's room, and it's covered in pages ripped out of Playboy or Penthouse. During the '90s, this practice was fading but it was still prevalent enough on an absolute level for me to remember it (at least the early-mid '90s anyway, not so much after that). Even if it wasn't a Playboy centerfold, maybe it was Kathy Ireland from Sports Illustrated or the Janet Jackson cover of Rolling Stone.

Maybe someone with more free time can go through all the teen screwball comedies over the years and rate them for how much square footage of the characters' walls are taken up by pictures of girls. I don't recall any in American Pie or Superbad, but I wasn't paying attention for it either. Plus I haven't bothered with a lot of the dork squad comedies like the Harold and Kumar movies. My impression is that the same pattern seen above would hold up. Millennial guys are too busy using their computer, TV, internet, and cell phone to play video games -- no time left to think about girls. And I think the posters on their walls would reflect that too -- more likely to see ones about video games than half-naked chicks.

The final reason that the internet or technology in general has nothing to do with these changes up and down is that we see the same pattern over historical time. When violence was surging in the 14th C., there's an obsession with explicit and raunchy sex themes in even high literature like the Canterbury Tales or the Decameron. Ditto the Elizabethan-Jacobean period, the Romantic-Gothic period, and the lesser crime wave of the early 20th C. These cultures not only are more interested in the act of sex -- the look, the feel, everything -- but they explore a lot more, I hate to use the word, "transgressive" sexual themes. The clearest example is incest, perhaps the ultimate sexual taboo: see Hamlet, The Duchess of Malfi, Vathek and the Episodes, Twin Peaks, among many others.