He really is that influential

Malcolm Gladwell recently released a bla bla bla, and there's been a lot of yadda yadda in the blogosphere about it. Are his credulous misunderstandings really as influential as the critics suggest? Here is a plot of how frequently the phrase "tipping point" has appeared in the NYT through 2008: 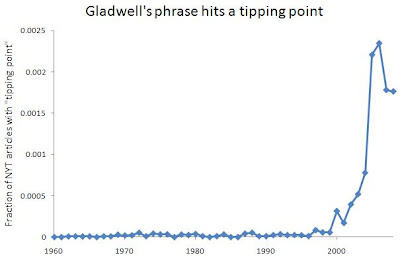 There's one occurrence in 1941 and another in 1959, but it's not until the '60s that it shows up regularly. Still, it's just a small but steady stream of blips, typically less than five times a year. In the very year that Gladwell published a book with that title, it shoots up by an order of magnitude, and since 2005 it has risen yet another order of magnitude, although this lame phrase appears to be passing out of fashion.

You don't have to coin a new phrase or concept to get rich quick -- you only have to popularize an existing one in a way that makes managers come away feeling well read.