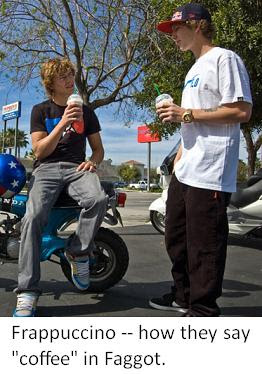 In any bar, if a guy strutted up to the counter and ordered a strawberry daiquiri, the girls would point and laugh from a safe distance while the other guys would surround him and duly begin chanting, "You! Are! Gay! -- You! Are! Gay!" If anything, guys steer toward drinks that are bitter, not sweet, in order to look tough.

If that's true for alcoholic drinks, why doesn't this happen at all when they order caffeinated drinks? Sit down in any Starbucks when it's busy, and it won't even take you half an hour to see the disgusting pattern emerge -- so-called men requesting a caramel macchiato, frappuiccino, passion tea lemonade, or -- worst of all -- a pumpkin spice latte. Like all other forms of pollution, the sound of a man ordering a drink with such a revoltingly cutesy name should be taxed by the government -- preferably by cutting off one of his balls, although on second thought that may not provide a very strong incentive in his case.

Those drinks are incredibly saccharine, and the guys have no excuse since they could just have easily ordered an espresso or black coffee. (And this is just as true for other coffee sellers, not only Starbucks. Look at all of those Dairy Queen blizzard wannabes that Dunkin Donuts peddles.) So, what's the key difference between caffeinated vs. alcoholic drinks, or perhaps between going to a coffee house vs. going to a bar?

We can rule out a lack of time for behaviors to settle in -- maybe at first a guy could've ordered a frappuccino and no one would have known how sugary it was, but "specialty" coffee has been entirely mainstream for 15 years. By now, people know roughly which drinks are sweet and which are bitter.

I also don't buy a costly signaling argument. It's true that the fruity coffee drinks are more expensive than the brewed coffee or espresso, while the fruity alcoholic drinks tend to be cheaper than the stronger ones. So maybe guys are just ordering whatever the most expensive stuff is in order to show off their wealth to female onlookers. But get real -- we're not talking an Aston Martin vs. a Honda Civic. If a guy wanted to look like a big spender in Starbucks, he'd conspicuously ask the barista about their espresso machines for sale, as though he were in the market for a several-hundred-dollar gadget. Or perhaps he'd order $100 worth of their ground coffee.

The other costly signaling argument is that guys are ordering fruity drinks to show how little-in-doubt their manliness is -- "Because I'm so macho, I can broadcast my fondness for 10 year-old girl drinks and no one will question my masculinity." Again, get real. These guys always look like hell, both physically and emotionally. It wouldn't work even if they weren't -- just imagine if James Bond's catch-phrase were altered to "Omigosh... I guess I'll just have an appletini."

And it's not as though the point of going to buy coffee is necessarily to load up on sugar. At Dairy Queen, we excuse guys for ordering sugar-bombs because that's all they sell. Because that's the whole point of going to Dairy Queen, we expect them to order such things. But they sell bitter drinks in coffee houses, and indeed that's probably what our mental prototype of "coffee" is -- not something with java chips, caramel syrup, and whipped cream.

I also don't believe it's due mostly to the lack of comfort that the onlookers would feel in pillorying him in a coffee house during the daytime, whereas they'd feel fine doing so in a loud and rowdy bar at night. Even if they wanted to, would guys try on pink running shoes at Foot Locker, or reach for a case of wine coolers at the supermarket -- let alone buy them?

And if you thought that guys aren't trying to look tough or impress anyone at Starbucks, saving that preening instead for the bar that night, guess again. You can't get them to shut up about the deal they're supposedly closing, the gig that their loser band has, bla bla bla. They also try to look at least somewhat successful (unless they're in IT), or at least show up in athletic gear to signal their fitness. And they often shamelessly flirt with the cute baristas. So clearly the coffee house isn't a world apart from the bar regarding macho posturing.

The only half-baked guess I have is linguistic -- there aren't any coffee names that sound badass. "Scotch," "gin and tonic," "whiskey" -- those all have a hard sound to them. But the only coffee drinks without sucrose are espresso and cappuccino -- and let's be honest, those names do sound just as la-la as macchiato and latte. Back when you could place your order for a "black coffee," that might have worked because black is inherently tough. "House blend" or "Pike Place Roast" just doesn't have the same no-frills ring of "black." Would a "Scotch, neat" have the same appeal if it were called a "Blissionata, pure"?

To test this idea, you'd look across languages and see whether men order the more bitter types of coffee where people have a more manly sounding name for them. For example, even if you don't speak Spanish, you can tell that a "cortado" sounds more macho than a "cappuccino." (And the connotation is tougher too -- it refers to espresso that's "cut" with a little milk.)

Perhaps coffee houses should invent mixed bitter tasting drinks and brand them with harder sounding names. It's good that they already call them "shots" of espresso, but that won't do for larger serving sizes. (Ordering 10 shots would make people think you were crazy, not strong.) I was going to suggest something subtle like "Thor's Hammer," but I see that's already been claimed by the alcoholics. However, this problem would work itself out during the competition between coffee houses: those who couldn't think of an appealing name would find their sales undercut by those who could. The winning names would have proven themselves.