Some thoughts and stats on ballet

- It's far less gay-friendly that I had assumed. Sure, gays are more likely to follow it than are lesbians or straights, but this just follows from their being more into any aspect of culture. In the end, ballet is more restrained than effusive, has nearly no potential for campiness, and on stage the dancers rarely give off a bitchy "I'm not your slave anymore" attitude. This is why homosexuals flock naturally to musicals and Cher concerts instead. (It has nothing to do with the fact that most of the stars are female: again, see the popularity of Cher, Madonna, and so on.)

- Female ballet dancers are much more girly than I would have thought, given their narrow hips and broad shoulders, which suggest masculinization. They're quite girly, in fact. Girls with tomboy behavior to match their boyish figures are more likely to go into gymnastics. I rarely, if at all, see a gymnastics girl on campus in anything other than her workout sweatpants and sweatshirt, no matter the occasion. They walk around like guys, puffing up their shoulder blades and holding their arms out, stiffened. And they're very likely to have a promiscuous streak in their public behavior -- whether this reflects their private lives, I don't know. 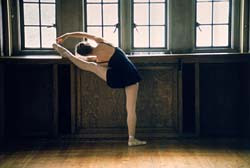 - Writing up a ballet counterpart to the post on attractive classical musicians would be unnecessary, since there are virtually no ugly ballet dancers, and I don't just mean their bodies, which is obvious. Some are average, but most are above average or very good-looking from the neck up. Have a look at the dancers of the American Ballet Theatre. If Isadora Loyola should break her ankle, God forbid, she could surely support herself as a cover girl during the recovery process.

Some fools will suggest that this is evidence of discrimination, that the ballet companies cynically choose the better-looking dancers in order to make more money through broadening their audience. Since dancing skills of this caliber are an honest signal of excellent health and likely of "good genes" that brought about this health, and since we find signals of health more attractive than signals of sickness, it's no surprise that good-looking people make better dancers. At any rate, I showed previously why this argument does not even apply where it appears most promising -- in pop music. Those who played the inaugural feminist Mardi Gras, Lilith Fair, are almost all good-looking, even though discrimination against ugly women is absent among the organizers. This doesn't mean the correlation is perfect, but it's clearly strong.

I don't think it's due to cross-assortative mating between pretty mothers and talented fathers, as I've suggested in the link above for pretty singers. Ballet dancers tend to come from middle-class families or above, and those fathers aren't dancers who married trophy wives. This can be put to a simple test: within families, does the best-looking sibling tend to be the most natural dancer? If so, the cause is probably a suite of genes that helps you excel in both, whatever the mechanism is (again, could just mean they strengthen your health). 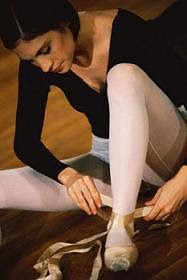 - Ballet dancers would make ideal girlfriends. Aside from their looks and talent, the average personality traits augur well for a smooth enjoyable relationship. Although gregarious, they're also a bit coy, not wild-child types. They're needy and anxious enough to qualify as girly, but they have plenty of independent time and can handle pressure well. They're very curious and open to new things, but not in a way that would make your eyes roll -- they wouldn't take non-serious modern art seriously or get into astrology. More like learning French or Italian just for fun. They're conscientious enough to make flaking out a non-issue, and when they get distracted, it's in a productive way (the way I get when I think I've hit upon something important enough to table other things for the moment). And they're agreeable and empathetic while still having plenty of confidence and enough toughness to keep from getting annoyingly complaisant.

Admittedly this reflects my own tastes -- if you hate girls, you might love dating a banker or lawyer. (It's not that they're evil or insufferably boring, as the cliches go -- just not feminine.) As a plus for those in academia or the professions, having a dancer girlfriend or wife prevents career incestuousness and avoids the awkwardness that may result if you compete with each other, even remotely. For example, one professor might get envious of another if one was promoted faster, published more papers (or more important papers), and so on. The same is true for dancers who date or marry. By choosing a partner whose dimension of talent is orthogonal to yours, you steer clear of such potential obstacles (although you probably want someone whose magnitude of talent is comparable to your own).

- More, they're one of the few groups of good-looking girls who aren't very conceited about their looks. I suggested before that calibrating your self-image to a higher mean would make you more humble than otherwise. Since dancers live most of their lives surrounded by other toned and pretty girls, they may not think their looks are very special.

- In general, they're very likely to have an immunity -- whether inborn or acquired, I don't know -- to all sorts of modern vices. The average young adult female may not rob, murder, assault, and so on, but they are awfully likely to get blind drunk at frat parties, fall in love with skateboard dudes, and so on. Ballet dancers do not bring up at every chance how sketchy the average jock or drug-user is, or rail against fraternities -- it's just assumed that such things aren't worth their time, and so they pay them no mind. So, that suggests that it isn't acquired through a bad previous experience. Because people differ in temperament, some find it easier to lead a virtuous life. 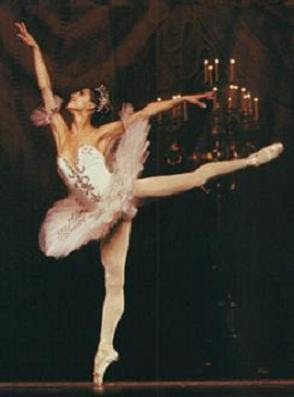 - Ballet dancers age very well, not just their bodies (here is Maya Plisetskaya at 50). Women face a difficult transition after 30 since their attractiveness has faded, and while dancers can forestall that time by five years or so, they too must try to age gracefully. That's not something women do much of anymore, but ballet prepares them well.

It is emotional and approval-seeking, which is youthful, but the restraint keeps her from appearing desperate, which is unflattering on older women. She can showcase her feminine grace, though the formality prevents her from competing with younger girls in informal contests, where flirtiness counts for more. And just as her movements connote both fragility and strength, so her performance as a whole suggests both diversion and dedication. She will naturally come to embody sprezzatura, while her peers either fade into the background or embarrass themselves through exhibitionism.

- To return to Plisetskaya, who is regarded as the greatest ballerina of the 20th century, she is Ashkenazi Jewish. The man regarded as the greatest dancer of the 20th century, Fred Astaire, was also Ashkenazi Jewish. [Correction: no he's not! When I know a person changed their name from something German or Yiddish-sounding to enter Hollywood, I assume they were Jewish.] Looking through the rosters of leading ballet companies, I didn't notice an overrepresentation of Jewish surnames, so this case isn't like physics or math. In fact, the stereotype is that Ashkenazi Jews are goofy klutzes on the dancefloor. So, while stereotypes do tend to be true, here we may have an exception -- probably due to the penchant this group has for self-deprecating humor.

- Pursuing a hunch based on the programs of the few performances I'd been to, I looked up some data on whether Chinese or Japanese people are more likely to become ballet dancers -- Japanese by a longshot. What's the importance? Well, it fits into a larger pattern in which the Japanese are more bold and excitement-seeking than the other East Asian groups. They are more likely to have an interest in some form of daredevilry, more likely to perform or enjoy rock music, more likely to innovate in some area, and so on. And they're noticeably better looking. I'm unbiased here, since I tend not to find East Asian females attractive. But Japanese girls are somewhat appealing -- and those who are only 1/2 or 1/4, more so. I'm not alone here, judging from the non-Asian guys who prefer Asian females, who typically desire Japanese women more than Chinese or Koreans.

For the data, I looked at 10 prestigious ballet companies, although I could not use the Russian ones or the Paris Opera Ballet since they either had no Asians or did not provide a roster of their dancers online. Those examined: American Ballet Theatre, New York City Ballet, Royal Ballet (London), National Ballet of Canada, Boston Ballet, Joffrey Ballet, Washington Ballet, San Francisco Ballet, Pacific Northwest Ballet, and Houston Ballet. I tallied the Chinese, Japanese, Koreans, and Southeast Asians at three levels: top (e.g., principal dancer), middle (e.g., soloist), and bottom (e.g., corps de ballet).

The National Ballet of China has existed for almost 50 years and was more or less founded by a Russian, so it's not that the Japanese got a huge head-start. The Chinese dominate in Olympic gymnastics, so they must have the basic kinesthetic requirements covered. Western dance companies frequently travel to China, so they do not want for influence. Again, the main difference seems to be that, while to Westerners both populations appear rather boring, the Japanese are more dynamic and exciting than the Chinese.

- While most music composed specifically for ballets is Romantic or later, I think Baroque works best in general. Counterpoint just seems to fit the spirit of ballet better. Here is the Kirov Ballet performing to Bach, as well as one from a more modern Brazilian company.