My manly deed for the day

Irina in New York just wrote a post on manliness that I couldn't help but find a bit funny -- not her desires, but the implicit advice that American guys should act more like Russian or Puerto Rican guys. With some American guys, this might work, but the "protecting a woman physically" type of manliness will strike most of us (and others in the developed world) as a bit proletarian. And as you can easily see in the case of faking an interest in sports, aping the manners and tastes of your inferiors is comically see-through, off-putting, and arrogant. *

When females actually are in physical danger from men, then of course this would be the right thing to do, but we have not lived in such a society for awhile now. In fact, within recorded history, the skulls of Britons have become thinner, presumably because of a relaxation of the pressure to protect your brain against clubs and spears. If Gregory Clark is on the right track in A Farewell to Alms, there has been recent change, some of it genetic, affecting the temperament of those who have industrialized. For one thing, contemporary Northwestern Europeans seem much less interested in violent entertainment. Just look at Hogarth's Four Stages of Cruelty to see what passed for fun in pre-Industrial England.

Women in the industrialized world -- at least the parts of it that are not given euphemistic titles like the "inner city" -- are not really at risk for being assaulted, and so are not in great need to be protected in that way. However, males -- especially aged 15 to 24 -- still threaten women's sense of comfort and security in other ways. A man could verbally belittle a woman, and assuming she didn't deserve it, any guy nearby should see to it that the taunter gets verbally bitch-slapped or perhaps punched in the gut if it's warranted.

Or take the example I saw tonight while studying in the school library. A guy and girl had met up in the lobby to study for a test. I was at a table about ten feet away and immediately noticed a very peculiar display of body language from them. It looked like this, with the guy on the left: 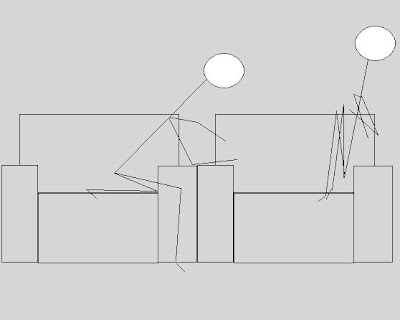 These are large lounge chairs, so I thought, "Why is she seated so far away from him, almost cringing?" The guy was about 5'5, and the arms of the chairs were about six inches wide, making a foot-wide gap between their seat areas, so his leaning over into her space was insultingly obvious. At first I thought she was just alternating positions due to restlessness during a long study session -- but she remained bolt upright. Clearly, she had been suckered into what she thought was a group study session, or maybe he acted normal at first but figured he'd make a move once they were in a more intimate setting.

As there weren't many people in the lobby, I could overhear the guy: he was ranting on about whatever Leftist college students are obsessed with at the moment. I nearly laughed out loud when he got to the topic of health care and underscored his point with a personal anecdote about how he had recently been beaten up and couldn't afford stitches. (That line gets 'em every time!) She politely indulged him for about ten minutes but finally said, "OK, can we get back to .... ?" The whole time, he was parasitizing her, too: she brought her notes, textbooks, and study guide, while he kept interrupting her with "Wait, can you say that again?" while he copied down what she'd said.

Finally a chair freed up right across from her, so I strolled over slowly and sat down, making sure to use slow, composed movements to provide a foil to his jerky starts and stops. I should clarify that she wasn't very pretty -- maybe 5.5 or 6 out of 10 -- so I was not doing this to seduce her in any way. I had on flannel pants, a Prince of Wales patterned shirt with a sweater over it, boots, and an overcoat laying by my side, while he had gone out in public in sneakers, a ratty t-shirt, and sweatpants -- yes, a male older than 11 years was wearing sweatpants. I had my things in order and continued reading my notes and study guides. The point was just to take her mind off the oaf, and to signal to him that he didn't stand a chance with her as long as I was there, so knock off the pathetic attempt to invade her space.

She couldn't have been more relieved: within the first five minutes, I counted five times when she conspicuously tousled her long hair, vs. never doing so in the 30 minutes before I sat down. After that, she did so another five times in 25 minutes. She also settled down into her seat but turned so her body was facing me, and her leg was pointed away from him and toward me. This is a much more effective way to express lack of interest, rather than cringe but continue to face him (sociopaths can smell fear). I even saw her smile a few times and make eye-contact with me -- no more awkwardness or feeling like she was held captive by some degenerate.

He simmered down too. For one thing, he got up to go who knows where at least three times, probably out of nervousness or frustration, vs. never doing so before I sat down. That must have added up to 5 or 10 minutes that I saved her from even being in his presence. He still kept trying to lean into her space, but I think he got discouraged once she was no longer facing him (as when she was cringing).

And he tried once more to go off on a revolutionary Left rant, starting with, "Well, I think there needs to be a fundamental change in the political system, I think we can all agree on that" -- yeah, demented college students should be sent to labor camps. I waited until he was halfway through his next sentence when I burst out laughing and giggling, pretending that it was something I had read. It had the intended effect, while avoiding wasteful confrontation: he got derailed, while my outburst emboldened her not to indulge him anymore but to give him that amused, contemptuous look of "are you kidding me?" We smiled at each other for a moment, and she started tracing her lower lip with the tip of her pen just after that.

It's pretty easy to shut down that type of person: just laugh at them like you don't take them seriously. They realize that they'll never convince anyone of their views, or else they would spend more time organizing workers, walking picket lines, and so on, rather than downloading Michael Parenti speeches from YouTube and shopping for sweatpants. What they crave is an audience who cares, so the best treatment is to chuckle and giggle at them the way a parent does when their toddler thinks they've discovered a "secret passageway" in the nearby woods. "Aw, aren't you cute!"

I had to leave for dinner, so I didn't get to see how their session ended, but he'd already lost his steam, so I didn't worry much. It felt pretty good to take care of some manly business by putting a slimy con-man in his place. (He had a dingy Eastern European look, like a Gypsy used car salesman.) As funny as it may seem, it's in situations like these that women in the developed world are most likely to cry out for someone to save them.

Still, rescuing them calls on the same internal qualities as does protecting them from saber-toothed tigers or an invading war party: attention to female distress signals, a sense of decency, an urge to dominate other males competitively, and maintaining a socially intimidating appearance in case you need to signal to the offender to cut out their nonsense (which in this case could be done just by wearing a sharp suit and tie -- no need to bulk up in the gym to suggest violence). **

* In my many run-ins with "radical chic" wannabes, it's always baseball that they're supposed to be fascinated with, never any other sport. This choice belies their upper-middle background -- even they realize how degrading it would be to take up an interest in NASCAR, a more blue-collar sport. And football and basketball are a bit too nouveau for someone who still wears spectacles in the style of Trotsky. So baseball it is.

** I know that many readers find my interest in clothing tiresome, but it's serious stuff: when I walk around the dining hall, I've made 6'4 musclebound football players who are Black move out of my way in games of "Chicken." (I stand 5'8 and weigh 135 lbs.) Part of it is walking deliberately and slowly, suggesting you won't steer away, but dressing several levels above them is necessary too. It's the same reason why a prole who lives in the gym will always move out of the way of a sharp-looking investment banker, even if they grumble in envy about what an obnoxious prick he is afterward.