How entitled are very pretty girls?

Roissy posted a chart on prettiness and sense of entitlement which says that as females go from 0 to 10 in looks, their entitledness increases. I disagree with what's going on above 8, so here is my graph: 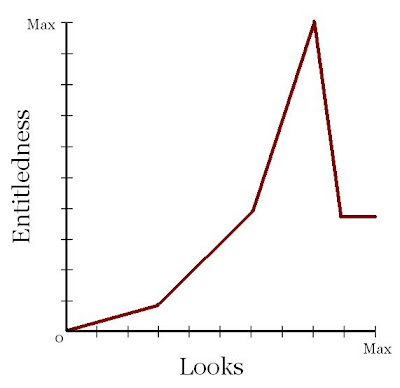 In words, entitledness increases weakly as you go from 0 to 3 in looks, increases more noticeably as you go to 6, takes off from 6 to 8, and the 9s and 10s feel as entitled as the 6s. That's my rough impression. The only real disagreement, again, is what's going on with 9s and 10s. Most people never meet such beauties, or if they do, it's only a passing encounter. I had the privilege to go to college with a lot of these girls, so I got to see how they carried themselves throughout the day, whether in class, in the dining hall, in the library, or at work. Yes, they actually worked! And many of them were international students whose families likely owned half of the country that they came from, so they had no need to work. Boring jobs too, like checking out books in the library.

They behave very differently from the 7s and 8s, on average.* At the top, they are more likely to be poised, confident, secure, nonchalant, agreeable, charming, elegant, and they smile and laugh sincerely -- whereas those just below them tend to be insecure, haughty, uptight, meanspirited, coarse, gaudy, and they frequently deploy fake smiles and laughter to help achieve their silly "life goals."

There is a distinction that must be made between sense of entitlement and the type of guy she ends up dating or marrying. The graph above claims that 6s and 9s have about the same entitledness, but clearly the 9 is in a much better position to get what she wants in a guy, and so probably will. But because she is so beautiful, she does not need to prove it to anyone -- suitors will follow her naturally enough, and many will be very marriageable, so she has little to worry about, as far as being taken care of is concerned.

So, she has the same attitude about what men should do for her as a barely above-average girl does -- men should go through certain motions, but she doesn't remove two stone tablets from her oversized bag on which are inscribed commandments such as, "Thou shalt buy me Christian Dior sunglasses," "Thou shalt pay half of my rent, plus yours," and so on. If they hadn't married by age 30, the 9s and 10s might feel a bit down but would still find plenty to enjoy in the other areas of life. The 7s and 8s, by contrast, would make sure the world heard how grave an injustice it was that they had not snagged their trophy husband.

The 9s and 10s are the ones who say things like, "I wish more guys would approach me, but I think most of them are too afraid I'll say no, so I don't get many dates." The 7 or 8 would spin her lack of dating as the result of men being deluded, stupid, clueless, or threatened by women like her ("threatened by a go-getter" if a lawyer, "threatened by tall women" if tall, "threatened by a woman with brains" if a grad student, etc.). In general, the difference in demeanor couldn't be greater.

And why not give a good example of what I'm talking about. Here's Mia Rose playing the guitar and singing in Portuguese-Portuguese.** Ahhhh.

* Please don't make me say it out loud that I'm only talking about tendencies -- it's an insult to the reader's intelligence.

** If her casual speech sounds like some Slavic language or Moroccan Arabic, that's because the Portuguese don't pronounce a lot of the vowels in a word, so it ends up being mostly consonants: prtgesh. Thankfully, singing requires her to pronounce them.