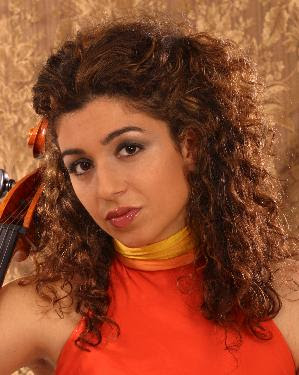 Cellist Ani Aznavoorian
Dennis Mangan has put up a few pictures of attractive violinists, and although he went through the formality of including verbal praise of their musical talent, I'm in a rush. I just looked through a list of classical pianists at Wikipedia, and found the following pulchritudinous pianists:

In my search, I stumbled upon the website Beauty in Music, which catalogues attractive classical musicians more broadly. I don't think there's anything objectifying about lists like these -- and if so, then females who go ga-ga over violinist Joshua Bell are as guilty as we are. For one thing, as long as the individuals are selected from a list of established or accomplished people, that's sufficient indirect evidence that they really do possess some noteworthy non-physical talent. (So, direct confirmation of their talent is easily left as an "exercise for the reader.") These lists simply note that, in addition, they happen to be quite attractive.

The only caveat here is that such women tend to be found only in the performance-based areas: music, acting, and so on. A quick Wikipedia / Google Image search turned up plenty of attractive pianists, and I could find as many violinists or flautists, probably. But if I'd searched for female composers, I would've come up with hardly anyone to choose from, let alone anyone attractive. After perusing the composers at Beauty in Music, which seems more like a list of female composers, not necessarily attractive, this hunch is confirmed, an exception being Roxanna Panufnik. The same is true for acting -- it's easy to find beautiful, talented actresses, but nearly impossible to find beautiful directors, at least in the same proportions. This likely has to do with levels of sex hormones: gracefully showing off for an audience is more of a feminine thing, while leading a group of subordinates is more masculine. In fact, one of the composers featured in Beauty in Music is a male-to-female transexual, Wendy Carlos, who did the synth-based soundtrack for A Clockwork Orange.

As for the other half of the arts and sciences, I can say that finding a pioneering research scientist who is also beautiful is pretty tough.* I'll bet, though, that if you looked at the analogue of pianists and actresses, you'd find many more attractive females: these would be lab technicians, research assistants, or perhaps scientists-turned-journalists (including popularizers of others' work). I don't see any real downside to this, however, since most girls who strive to achieve tend to be interested in performance and interpretation rather than creation and steering / directing.

* I know of at least one well-cited scientist who, if I were 5 or 10 years older, I would totally fall in love with, but I won't embarrass her and myself by saying who! (Note: if you provide a guess in the comments, I will delete your entire comment, whether the guess is correct or incorrect. I've kept this in a footnote since this isn't a personal post, so the comments should reflect that.)